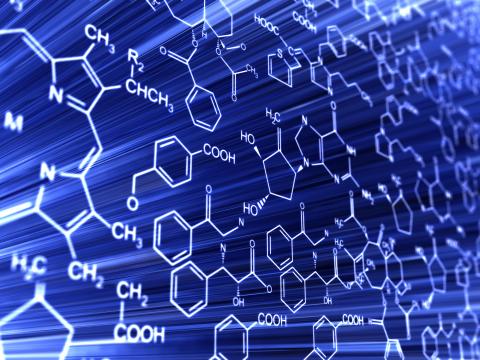 Over the last three decades, nuclear magnetic resonance spectroscopy (NMR), an essential tool for organic and materials chemists, has crossed several frontiers. These developments have paved the way for the analysis of structurally ever more complex compounds or the development of analytical applications that are as sophisticated as they are varied. In this respect, cutting-edge NMR instrumentation at the Institut de chimie moléculaire et des matériaux d’Orsay (Orsay Institute of Molecular Chemistry and Materials) (ICMMO - Université Paris-Saclay, CNRS) enables Philippe Lesot and his collaborators to take advantage of the detection of deuterium atoms in natural abundance. In combination with oriented solvents, the team has developed various analytical and innovative tools.

More than 70 years after its discovery by physicists, NMR spectroscopy is still full of surprises. Used extensively by the community of chemists to determine the structure of synthetic or natural molecules, it is based on a simple principle: it consists of analysing the frequency response of the atomic nuclei (similar to “small magnets”) of molecules in interaction with the magnetic field of the NMR spectrometer, under the effect of an adequate electromagnetic excitation. The return to the equilibrium position of the nuclei provides information on their chemical environment, their inter-nuclear couplings and their dynamics, which are used to determine, for example, the structure of molecules.

Over the last 20 years, NMR has undergone significant instrumental and methodological developments, considerably expanding its fields of application. In 2020, the team of Philippe Lesot, a researcher at the Institut de chimie moléculaire et des matériaux d’Orsay (Orsay Institute of Molecular Chemistry and Materials) (ICMMO - Université Paris-Saclay, CNRS), in collaboration with Roberto Gil from Carnegie Mellon University (CMU) in the United States, has crossed a new frontier by demonstrating the analytical potential of two-dimensional deuterium anisotropic natural abundance NMR (DANA 2D NMR) for the determination of the three-dimensional structure of natural bioactive products (chirals) from 2H quadrupolar interactions.

Classical NMR experiments use liquid solvents (isotropic), in which a solute has no preferred orientation on average in a magnetic field. An occurrence that no longer exists with anisotropic fluid solvents (liquid crystals): they force the dissolved molecules to orient themselves in a preferred direction. New so-called “anisotropic” NMR interactions, linked to the 3D structure of the molecules become accessible, as they are not averaged at zero as in a liquid. This is the case of the homo and heteronuclear dipole-dipole coupling interaction, but also of their chemical displacement anisotropies, which describe the dependence of chemical displacements in a given spatial environment. 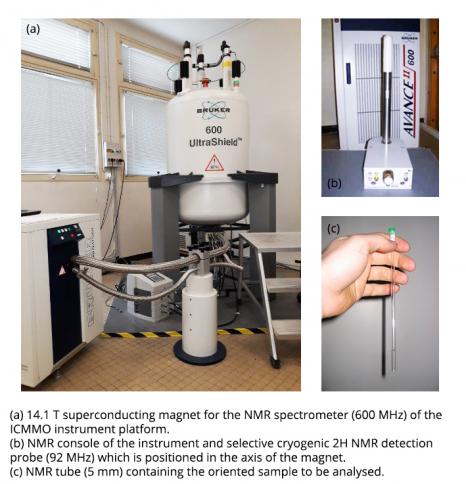 The advent of 2H NMR in natural anisotropic abundance

The second hydrogen isotope (1H) naturally present in hydrogenated organic molecules, the deuterium nucleus (2H or D) has the same number of protons as its parent but a different number of neutrons. With a relative abundance of 0.015%, i.e. about 10,000 times less than 1H, deuterium remains perfectly detectable by NMR. Since the 1980s, 2H NMR in natural abundance has been used to analyse the 2H isotope profile of molecules of economic interest (ethanol, vanillin) in order to combat counterfeit food. This powerful tool, called RMN-FINS®, is moreover at the origin of the success of the French company EUROFINS ANALYSE, which has become the international leader in technical analyses, tests and inspections.

The presence of an additional neutron in the deuterium nucleus induces an anisotropic distribution of electrical charges, causing a nuclear quadrupolar moment. By interacting with the electric field gradient of the carbon-deuterium chemical bond, a quadrupolar interaction is created. It is this interaction that NMR exploits, via the detection of residual 2H quadrupolar couplings when using orienting solvents. These couplings are at the origin of the formidable adventure of the DANA NMR, developed in particular by Philippe Lesot and his colleagues, within the ICMMO NMR team, which resulted in about 70 scientific and science outreach articles.
Theoretically, DANA NMR suffers from two major difficulties: the complexity of the recorded 2H spectra and the intrinsic sensitivity of this type of experiment. The first is circumvented by the use of two-dimensional NMR experiments simplifying spectral analysis. The second, more technological, consists of using intense magnetic fields (generally greater than 10 T) induced by superconducting coils cooled to very low temperatures (-269°C) and combined with cryogenic 2H detection probes, cooled with helium to about -255°C. These probes thus reduce the thermal noise of the electronics, and the gain in sensitivity is of a factor 4 to 5 compared with a standard NMR probe. “A 14.1 T (600 MHz) spectrometer equipped with a cryoprobe then has the same sensitivity as a 35.2 T (1.5 GHz) spectrometer, which doesn’t exist today!” Philippe Lesot points out. This scientific equipment present at ICMMO is moreover the pride of its instrumental platform: by reaching a 2H NMR sensitivity that is unique in the world, it makes it possible to record high-resolution 2D DANA NMR spectra of complex, high molecular weight molecules, with reasonable experiment times (about ten hours of data acquisition).

The art of spectrally discriminating enantiomers

The development of DANA 2D NMR is historically part of the problem of determining the enantiomeric purity of bioactive chiral molecules. As a reminder, two enantiomers are the two stereochemical forms of a chiral molecule, images of each other in a mirror but not superimposable. Due to their different atomic spatial arrangement, enantiomers often have different, sometimes opposite, biological properties. “The difference between the taste of orange and lemon is simply due to the three-dimensional configuration of the same molecule (limonene) present in these fruits. In pharmacology, enantiomers of bioactive compounds can induce antagonistic responses in the body and their (cytotoxic) effects can be dramatic. This was the case with thalidomide, an active chiral molecule administered to pregnant women at the end of the 1950s, one of the enantiomers of which had teratogenic effects,” Philippe Lesot explains.

Since the magnetic properties of the enantiomers are identical, NMR is inherently unable to discriminate their signals. The solution developed by the ICMMO team consists of using homochiral orienting media, such as polypeptide liquid crystals. In these media, enantiomers do not orient themselves in the same way on average, which induces a different set of anisotropic NMR interactions for each isomer. Specifically, it becomes possible to differentiate their spectra, while measuring the proportion of each of the enantiomers in a mixture. In this little game, the quadrupolar 2H interaction proves to be extremely interesting, since it is extremely sensitive to a difference in molecular orientation. Initially explored with deuterated molecules, this approach quickly turned towards DANA NMR.

DANA NMR: high-performance technology for a wide range of applications

In addition to its advantage for the analysis of chiral molecules that other techniques, such as chiral alkanes, are unable to analyse, DANA NMR has a wide range of applications. The ICMMO team, in collaboration with researchers from the University of Nantes, has, for example, used it to elucidate the stereochemical mechanisms of enzymatic reactions leading to the synthesis of prochiral essential fatty acids, such as methyl linoleate. The technique has also contributed to the isotopic analysis of molecular geo-biomarkers (miliacin) for monitoring changes in the Earth's climate. It provided geochemists with key molecular information that isotope ratio mass spectrometry (IRMS) failed to provide. A collaborative work that brought together researchers from the ICMMO and the University of Orléans.

Recently, the DANA 2D NMR proved to be a promising tool for determining the 3D structure of bioactive molecules, “an asset that remains unexploited to this day, and the culmination of years of fruitful methodological developments supported by the ICMMO, the University and the CNRS,” Philippe Lesot stresses. All in all, the future is full of promise for the DANA NMR... and anisotropic projects! 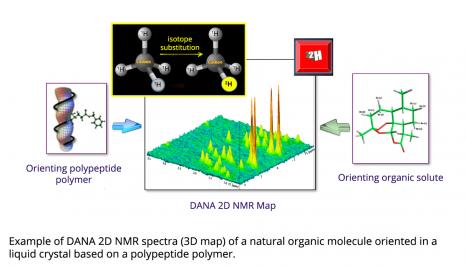