The multiple possibilities of heptazines

Thanks to the impetus provided by a few researchers who are interested in this family of aromatic compounds with a three nitrogen heterocyclic structure, heptazine chemistry is now being reinvented. New ways of synthesizing precursors and new derivatives are emerging from laboratories and are fostering new, promising and numerous applications.

Chemistry is always full of original research topics. Still extremely underdeveloped until the early 2000s, molecular heptazines (or tri-s-triazines) are now an emerging and rapidly expanding field. Consisting of a common base of three triazine aromatic rings fused together and forming a sort of triangle, these molecules differ in terms of the groups present on the “vertices” of the triangle. In recent years, this field of research has experienced a real upturn thanks to innovative work. First and foremost, there is the work of Pierre Audebert, a professor at ENS Paris-Saclay and a researcher at the Photophysique et photochimie supramoléculaires et macromoléculaires laboratory (Supramolecular and macromolecular photophysics and photochemistry) (PPSM - Université Paris-Saclay, ENS Paris-Saclay, CNRS) and the XLIM laboratory (CNRS, Université de Limoges).

A research topic like no other, and a prestigious publication 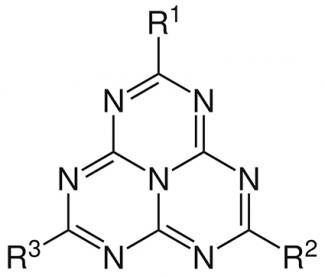 While his previous research focused on tetrazines studied under fluorescence and the interaction between electrochemistry and fluorescence, this specialist in heterocyclic molecules has recently become interested in their close relatives, the heptazines, and their rare properties. “As an electrochemist, I like heterocyclic chemistry. Tetrazines have been one of the main subjects of the PPSM laboratory and of my research for more than fifteen years. Heptazines, which I’ve recently become interested in with the help of my collaborators Clémence Allain (PPSM) and Bernard Ratier (XLIM), are some other exciting heterocycles which are highly charged in nitrogen,” explains Pierre Audebert, who has just written an article on the subject which has been published in the Chemical Reviews journal.

“This publication draws on bibliographic work carried out by Sung-Ho Lee for his Master's report on molecular chemistry and interfaces (MOCHI). It is also the result of a specially created collaboration with Edwin Kroke’s inorganic chemistry laboratory at the ‘Technische Universität Bergakademie Freiberg’, and the first synthesis of heptazine by mechanochemistry with the help of Frédéric Mazaleyrat from the ‘Systèmes et applications des technologies de l'information et de l'énergie’ laboratory (Information and energy technology systems and applications) (SATIE - Univ. Paris-Saclay, ENS Paris-Saclay, CNRS, CNAM, Univ. Cergy-Pointoise).”

Heptazines are poorly soluble or even insoluble, have a high thermal and chemical stability, decompose at temperatures above 500°C and, as a result, are confusing. Heptazines are quite similar to tetrazines in terms of reactivity in that most of them proceed to nucleophilic aromatic substitutions. However, they show some notable differences. “For example, in contrast to phosphotetrazines, phosphoheptazines are not stable at all. The carbon-phosphorus bond breaks spontaneously for apparently no reason at all,” explains Pierre Audebert.

Slightly less fluorescent than tetrazines (which fluoresce in orange), heptazines fluoresce in violet and this fluorescence has a long lifetime. They are also quasi-reversibly reduced at a relatively high redox potential, which makes them good oxidants when in an excited state. “The alternation of carbon and nitrogen atoms in the aromatic rings makes these molecules very electro-deficient. When they are photoactivated, their excited state is a strong oxidant.” These molecules have an optical and electronic behaviour which suggests promising applications in optoelectronics and photocatalysis, or for the development of COFs (Covalent Organic Frameworks) or MOFs (Metal-Organic Frameworks). While currently used photocatalysts are mostly organometallic and can be toxic and expensive, heptazines represent potential new efficient and metal-free photoredox catalysis platforms. 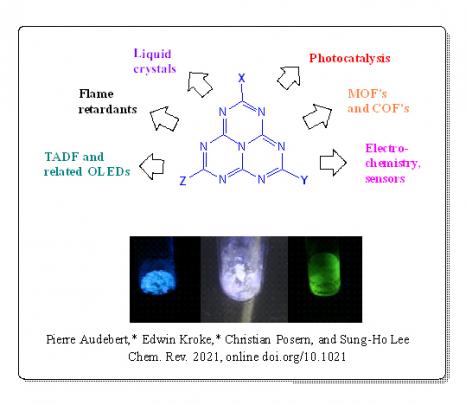 From the first syntheses, to the essential precursors

Their background is not recent. The first synthesis of a molecule from this family (linked for a long time to that of carbon nitrides) dates back to 1830, but the name “heptazine” had not yet appeared. By reproducing the protocol developed (but not published) by Swedish scientist, Jöns Jacob Berzelius, the German chemist, Justus von Liebig, created a pale yellow, solid compound which he called “melon”. In this molecule, the vertices of the triangle formed by the triazine rings each have an amine and are more or less oligomerized. Other syntheses of compounds of the same type followed and resulted in, for example, melem, whose structure displayed amino groups (NH2) but whose structural formula remained unknown at the time. It was not until 1960 that the name “heptazine” was first introduced. Used in industrial applications as fire retardants and in materials, heptazines - and molecular ones in particular - have long been the subject of little basic research.

The crux of the problem remains the synthesis and the small number of precursors which can be used for the production of derived compounds. Although melem has been the subject of several studies leading to the synthesis of several heptazine derivatives, “many synthesis pathways come to a dead-end and lead nowhere,” points out Pierre Audebert. And until recently, the preparation of the other precursor mostly used for the synthesis of derivatives by pseudo electrophilic substitutions - trichloro-s-heptazine - remained a real challenge. “To create trichloro-s-heptazine, potassium cyamelurate must be heated to 140 °C in phosphorus pentachloride (PCl5), or in a mixture of PCl5 and phosphorus trichloride (PCl3). These are extremely aggressive and toxic reagents. In addition, the reaction produces hydrochloric acid (HCl) gas and traces of chlorine. To handle them in an adequate, safe environment, it is necessary to have dedicated equipment, which is very expensive and which few organic chemistry research laboratories are able to afford. This results in very few laboratories in the world producing trichloro-s-heptazine. This has been a stumbling block for research. Moreover, this molecule is very reactive. It hydrolyses quickly as soon as it is in solution and is not very soluble,” explains Pierre Audebert.

A new precursor to unlock the problem

In 2019, the researcher resolved the situation. He developed a new efficient and less dangerous synthesis pathway resulting in a new precursor - tris-(diethylpyroazolyl)-s-heptazine or TDPH -, which made it possible to avoid using trichloro-s-heptazine with all its disadvantages. “TDPH has many advantages: it is soluble, it is produced simply by mechanochemistry and, apart from a rotary ball mill, it does not require special equipment.” The chemist starts with melamine to obtain, by pyrolysis, melem, which, by heating in the presence of hydrazine, results in tris-(hydrazino)-s-heptazine - an almost insoluble solid. He then mills this compound in the presence of diketone and an acid catalyst for 15 minutes and obtains TDPH in 30-40% yield.

This alternative to trichloro-s-heptazine has now breathed new life into the organic synthesis of heptazine derivatives. “TDPH is a real discovery. It has opened the whole field up again,” says Pierre Audebert, who is now focusing on the synthesis of new derivatives, particularly perfluorinated ones, in order to increase the oxidation potential of these molecules and explore their properties.

The chemistry of heptazines is now becoming more mainstream and is showing that it is capable of moving into a good position in terms of research on active organic molecules.