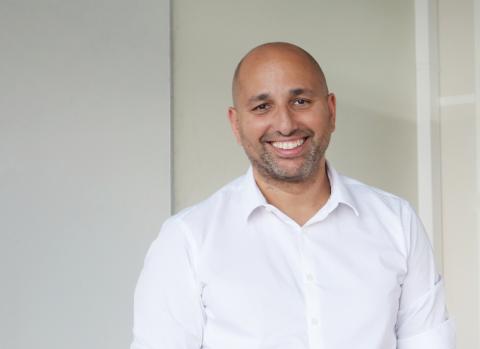 Merouane Debbah is a researcher for the Large Networks and Systems Group at Université Paris-Saclay (LANEAS - CentraleSupélec). His research lies at the boundary between algorithmic mathematics and wireless information and telecommunications theory. Today he heads a research centre belonging to the Chinese telecom manufacturer, Huawei, and is preparing for the opening of a second research centre at the beginning of October 2020.

Merouane Debbah acquired his expertise during his applied physics studies at ENS Paris-Saclay (ex-Cachan), in the late 90s when the use of mobile telecommunications and the Internet was booming. He wrote his thesis on the use of random matrices in the design of wireless communications networks, defending it in 2002 in the scope of a cooperation with Motorola’s R&D centre in Saint-Aubin. So the young researcher was already working on the early stages of 4G and Wi-Fi technology.

From Vienna to Nice

But the explosion of the Internet bubble prevented the manufacturer from recruiting him. A little embittered, the young researcher went to work in Austria as a senior researcher at the telecommunications research centre of Vienna. After one year, he seized an opportunity to return to France with a teaching position at Eurecom, the Télécom Paris school of engineering in Sophia Antipolis. He remained there for four years, stimulated by the dynamism and international nature of his academic environment, and became an expert in information theory. Merouane Debbah also developed a taste for entrepreneurship there, and contributed to the launch of a number of start-ups.

Return to the roots

In 2007, he was contacted by Supélec to set up a flexible-radio research chair for Alcatel Lucent. “I suddenly found myself in a whole new dimension, working with the likes of Bell Labs (the manufacturer’s research centre and a world reference in the field). Between 2007 and 2014 (the year when the manufacturer put an end to the chair), I trained 30 PhD students and 15 postdoctoral researchers who all went on to follow great careers in the field,” recalls Merouane Debbah. At the same time, he taught signal processing to Supélec’s first-year and master’s engineering students, and created an e-learning start-up company with two of his Austrian comrades. “That was also the most rewarding period of my career, as I received various distinctions for my research work.” In 2012, Merouane Debbah also received the ERC Grant MORE (Advanced Mathematical Tools for Complex Network Engineering) which helped him finance much of his research.

Notably, Merouane Debbah received the IEEE Glavieux award in 2011 for his activities relating to the Massive MIMO system (telecom transmission), one of the key technologies behind the development of 5G. The researcher developed an entire mathematical tool set aimed at enhancing the design of all MIMO systems (Multiple-Input/Multiple-Output).

6G on the horizon

Today, we are witnessing two major technological breakthroughs: 6G and artificial intelligence (AI). These correspond to Merouane Debbah’s two lines of research, telecommunications and mathematics. “While AI is omnipresent in the future of telecom systems, another challenge we face is a significant increase in network bandwidth capacity, of around 1 Tbit”, points out the researcher who stretches the fundamentals in both these fields. He spends half of his time assessing just how far he can “push out the boundaries” in terms of bit transmission rate (calculation capacity and power required). The other half is devoted to developing the algorithms that will allow him to reach those boundaries.

The difficulty resides in the execution of breakthrough research which interests the entire community, according to Merouane Debbah. “There are two forms of research: problem-driven research, in which we search for solutions to existing problems, and technology-driven research, in which we create the problem and the solution simultaneously,” he explains. “To me it no longer makes sense to distinguish between applied research and primary research.” Hence, his research is inspired as much by practical issues as by the fundamentals of science. He has succeeded in striking a balance between becoming one of the most frequently-cited writers of scientific articles (HiCiSci) and working within the industry. Since 2014, he has directed the mathematical and algorithmic science laboratory of the Huawei France research centre. He is tasked with developing 5G research while maintaining links with CentraleSupélec. “This is of benefit to and respects all parties, with the pooling of knowledge relating to the problems faced both in academia and in the industrial world.” He has his future cut out for him with the Chinese manufacturer, as he is to take the reins of another research centre to be inaugurated in Paris on 9th October 2020. His road map includes the creation of a 30-strong team of researchers who will work on technological breakthroughs from a purely fundamental stance (post-Moore & Shannon laws and post-Edelman architecture). The first results are expected ten years from now.