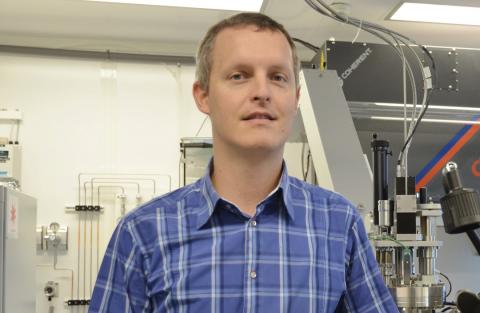 Manuel Bibes is a research director at the CNRS/Thales joint physics unit (Université Paris-Saclay, CNRS, Thales). A recognised specialist in the application of metal oxides to spintronics, he explores the fundamental properties at their interface searching for new oxides to revolutionise microelectronic technology.

Very early in his career, Manuel Bibes specialised in metal oxides, encouraged by André Fert, brother of Nobel physics prizewinner Albert Fert and professor at INSA Toulouse, where the young man studied engineering. He was only 25 when he obtained his French-Spanish PhD from the Institute of Materials Science of Barcelona. "Albert Fert had discovered giant magnetoresistance ten years earlier. I wasn’t familiar with all the aspects of the research at the time but choosing manganite interfaces as my thesis topic set me on the right track.” Manuel Bibes used his expertise in oxides with spintronics as soon as he began his postdoctoral programme in 2001 at the CNRS/Thales joint physics unit where worked Albert Fert. Recruited as research officer aged 27 by the CNRS, he left to work for four years at the Institute of Basic Electronics (IEF), and then returned to the CNRS/Thales laboratory in 2007. In 2014 he was promoted to Director of Research at the CNRS.

“Spintronics is a branch of electronics closely related to magnetism in materials. The specialty uses an electron’s spin - or magnetic property - in addition to its electrical charge to produce electronic components such as memories and transistors," explains Manuel Bibes. The researcher works with oxides that have remarkable properties, especially those that crystallise in a simple chemical structure called perovskite. "The family of perovskites includes a wide variety of materials such as iron, titanium and manganese. They all have similar structures but quite different properties. They can be insulators, conductors, superconductors, magnetic or ferroelectric.”

Multiferroics display several features simultaneously: both ferromagnetic (acting like magnets with spins aligned in parallel), and ferroelectric (their spins are electric dipoles, the load is distributed in the same direction). “The coexistence of their properties produces an interesting memory effect. It is possible to act on the magnetic characteristic of the material with an electric rather than a magnetic field which is much more practical,” explains the researcher whose studies focus on bismuth ferrite. Its properties at room temperature hold promise for future applications.

The other advantage is the possibility to combine perovskite-structure oxides: for example, one with electrical properties and the other with magnetic properties. "We produce them in thin, atomic-scale films so that they act on each other. Not only do these materials have their own properties but combining them creates even more. There is still so much to discover," says the researcher.

From fundamental properties to potential applications

What’s more, new properties which do not exist in either of the two individual materials sometimes emerge at their interface. “Our team has been working for over a decade on an amazing metal interface that forms between two perfectly insulated oxides. The result is a metal called a two-dimensional electron gas which is an extremely effective electrical conductor. Five years ago, in collaboration with researchers from Grenoble, we demonstrated an interesting new function in the interfaces: they can convert electric current to spin current very efficiently.”

This research has attracted the attention of microelectronic giant, INTEL that has just signed a contract with Manuel Bibes’s team. "We are reaching the fundamental limits of quantum physics with transistors that are smaller and smaller, down to 10 nanometres. To make them even smaller, the industry is forced to use radically different technologies and physics concepts.”

Manuel Bibes appreciates the mix of fundamental/applied research in his laboratory: half of the researchers and academic staff are employed by the CNRS or Université Paris-Saclay, and the other half by Thales. "I’m still free to choose my research subjects and I work with specialists in a wide range of applied fields. It’s an excellent working environment that stimulates ideas.” Manuel Bibes has also worked with Dutch and German laboratories for many years.

In 2017 he received the Descartes-Huygens Prize from the French Academy of Sciences and the Royal Netherlands Academy and in 2018 the Friedrich-Wilhelm Bessel Prize from the Alexander von Humboldt Foundation. Ranked among the most cited researchers (Highly Cited Scientists), awarded the EU40 prize by the European Materials Research Society in 2013 and two ERC projects: MINT 2014 and FRESCO 2020), Manuel Bibes keeps a cool head: "It’s important to remember that the best way to achieve science results is to work together, to develop and maintain a network with laboratories and researchers around the world. Université Paris-Saclay ensures we have decisive international visibility.”