Loïc Bertrand is a researcher at the Supramolecular and Macromolecular Photophysics and Photochemistry Laboratory (PPSM – Université Paris-Saclay, ENS Paris-Saclay, CNRS). He studies the properties of ancient materials using micro-imaging and reveals the previously unseen secrets of certain heritage objects.

Loïc Bertrand studied condensed-matter chemistry at the ‘École polytechnique’ between 1994 and 1997. He also attended optional courses in art history and developed a keen interest in artistic practices. He combined these two fields by studying materials engineering at the ‘École Mines ParisTech’ for two years. He completed a Master’s Advanced Studies Diploma (DEA) in materials science at the same time, which was jointly accredited by Université Pierre et Marie Curie (which is Sorbonne Université today) and the École polytechnique. “I contacted two researchers at the Research Laboratory of the Museums of France (LRMF, known today as the C2RMF) and these meetings inspired me greatly. They confirmed my desire to study ancient materials.” In 1999 up until 2002, the researcher worked at LRMF and ENS Paris in order to complete his doctorate there. His PhD focused on the study of keratinised tissues and their physicochemical properties using synchrotron imaging methods, which were in rapid development at the time. “I was interested in the preservation mechanisms in an archaeological context of biological materials from Iron Age excavations in France and from Egyptian collections from the Greco-Roman period.” Loïc Bertrand then completed a post-doctorate at the Biochemistry Department at Cambridge University in the United Kingdom. “During this time, I furthered my knowledge of biological systems by studying the interaction between proteins and ligands using crystallographic methods.”

The creation of IPANEMA

Loïc Bertrand returned to France in 2004 and continued his research work with a second post-doctorate which was divided between the Solid State Physics Laboratory (Univ. Paris-Saclay, CNRS) and the SOLEIL synchrotron, which was in the process of being developed. The researcher was employed there in 2005 with the brief to develop applications for the large instrument so that it could investigate heritage materials. With support from Île-de-France region and the Ministry of Higher Education, Research and Innovation, he set up the European Photonic Institute for the Non-destructive Analysis of Ancient Materials (IPANEMA - Université Paris-Saclay, CNRS, UVSQ, Ministry of Culture) which he managed until 2019. “We’ve initiated a new research approach where researchers, post-doctoral fellows and students from various fields come to train in the laboratory and exchange their skills and expertise for periods of up to several years.” It is still the only laboratory for the study of heritage materials on a large instrument on an international scale.

IPANEMA laboratory nurtures relationships with the Louvre, the Quai Branly museum, the National Museum of Natural History, the Paris Philharmonic, the Rijksmuseum in Amsterdam and the Smithsonian Institution in Washington. Since heritage science is a cross-disciplinary subject, scientists at IPANEMA regularly take part in consortiums which bring together specialists in physics, data science, history and conservation, art history, restoration, archaeology and palaeontology.

The subject of heritage, which on the one hand facilitates the understanding of the past and on the other hand promotes the preservation of heritage, covers a very wide range of objects. These can be lithic, biological or metal materials, and are often complex. However, they have properties which are common, such as an altered composition or multi-scale heterogeneity. The researcher's two favourite subjects are the development of methods for the study of past environments of fossilized remains and the study of exceptionally preserved archaeological textiles. Their analysis aims to provide heritage institutions and museums with information on social and funerary practices, historical contexts and the history of techniques.

Loïc Bertrand employs full-field micro-imaging technology and scanning techniques. He uses the synchrotron, a large instrument which uses the high-energy acceleration of charged particles to generate light. This device has properties which make the fine, high-resolution analysis of objects possible. “X-rays interact with matter using the different processes we use in imaging to study the mechanisms and actions which cause variation in the composition of objects.” Detecting the molecular structure and physicochemical interaction of objects, their density and their structure provides information on their manufacturing processes, the materials used (and indirectly, their dating), and the impact of an artistic process or alteration processes. For example, it is possible to find the weave - i.e. the pattern - of an ancient textile, identify its fibres and count the number of threads per centimetre in order to establish which looms were used to make it. “Imaging provides us with information which we thought was totally lost because it shows us developments and hand skills within a static sample. It opens up a whole new world of knowledge.”

In accordance with CNRS practice, Loïc Bertrand ceased managing IPANEMA in 2020 at the end of his second term in that position. He joined the vice-presidency of Université Paris-Saclay in order to spearhead thinking on how to develop a multidisciplinary approach within the campus. He also came to manage the PPSM laboratory and develop the subject of ‘ancient and paleo-inspired materials’.

The researcher enjoys having variety in his work and is also interested in how contemporary paintings deteriorate. This is part of the project to transfer collections in storage at the Georges Pompidou National Art and Culture Centre to the future ‘Fabrique de l'art’ conservation and restoration centre planned for 2025 and located in Massy, Île-de-France. In addition, he is initiating discussions about reproducing the durable nature of certain archaeological materials in order to be able to draw inspiration from them for the design of more ecological materials.

The Collaborative Center Atoms For Heritage

Loïc Bertrand has been involved in regional, national and international think tanks on the future of heritage science since 2010 and is today overseeing the establishment of the ‘Collaborative Center’ Atoms for Heritage. This is a new partnership, signed last September by Université Paris-Saclay with the International Atomic Energy Agency (IAEA). It aims, among other things, to develop best practices and training programmes at an international level in order to preserve heritage, as well as to combat the illicit trafficking of heritage objects. This is in line with the mission to promote peaceful nuclear applications for the benefit of society. “The University has become the first centre of excellence in heritage science to develop this type of project on such a large scale.” 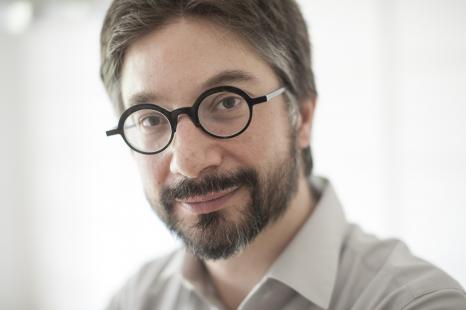 *Header: A comparison of high spatial dynamics photoluminescence and optical microscopy images.
A comparison of high spatial dynamics photoluminescence (PL) and optical microscopy (bottom) images. The imaged area corresponds to a portion of one of the spokes of the Mehrgarh amulet, an Early Chalcolithic copper object found in the 1980s in present-day Pakistan. The PL image reveals a eutectic rod structure, invisible by any other technique tested. The secret of its manufacture has been elucidated, thanks to this new approach to UV/visible photoluminescence spectral imaging carried out at the Soleil synchrotron. This amulet is the oldest object made using the lost wax process. This process uses a model, carved from a material such as beeswax, and then moulded in a clay. The wax melts at a low temperature and is easily removed, the metal is poured into the mould taking the place of the wax.
© T. SEVERIN-FABIANI / M. THOURY / L. BERTRAND / B. MILLE / IPANEMA CNRS MCC UVSQ / Synchrotron SOLEIL / C2RMF CNRS Photothèque.