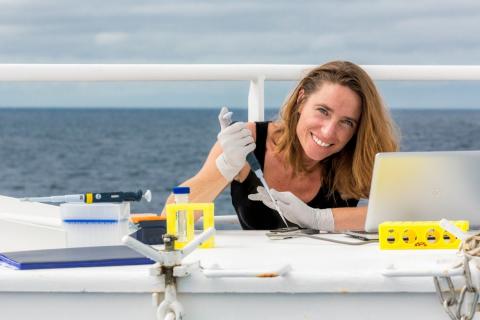 Julie Poulain has worked in marine environmental genomics at France's national sequencing center, Genoscope (CEA/CNRS/Université d’Évry), for nearly twenty years. A few months ago, she got back from the Tara Pacific expedition, where she helped to design and implement genomics analysis protocols and handle the scientific logistics of coral collection in the Pacific Ocean.

"I'm a research engineer, not a researcher," clarifies Julie, who did not find her true calling until taking a post-graduate degree in environmental microbiology applied to soils and aquatic environments. Today, she provides valuable support to her researcher colleagues at Genoscope, who always make a point of giving her credit when they publish. "I'm comfortable in my role as an engineer assisting researchers in their quest for answers to scientific questions."

On board the Tara

From May 2016 to October 2018, Julie Poulain found herself on board the schooner Tara for her fourth major expedition, the Tara Pacific expedition devoted to studying the ability of coral reefs to adapt to climate change. This public-private consortium pursues very high-level research while at sea. Working closely with Rainer Freidrich from the specialty logistics company World Courier, Julie Poulain oversaw procurement of scientific consumables for the Tara and the shipment of samples from the Tara to Genoscope. "I was responsible for keeping an eye on stock levels for collection consumables and reagents in addition to preserving samples and shipping specimens during stopovers," she explains.

The Tara Pacific expedition is interested in the coral ecosystem, i.e. corals and zooxanthellae, the microscopic algae that live in symbiosis with them (and provide up to 90% of their energy needs). The schooner sailed the Pacific Ocean to collect specimens of three species of coral from different physiological environments. The aim was to learn more about their mechanisms of resistance and resilience. "When corals are subjected to stress, they expel the micro-algae and then turn white, which is known as bleaching. If the disruption of this symbiotic relationship lasts too long, the corals eventually die. We want to study how they interact with each other and with the microbiota."

A resource for humanity

"For humans, corals are valuable in several ways. First of all, coral reefs protect coastlines from wave action and storm damage. Secondly, as a tourist attraction, they represent an economic resource for populations in the Pacific. Most importantly, they constitute a major reservoir of biodiversity. Although our prime objective is fundamental research, we make a point of raising local awareness of the need to preserve them," remarks Julie Poulain.

A custodian of riches

Having completed the painstaking reception and inventory procedures, Julie Poulain now finds herself in charge of a stock of 37,000 highly coveted specimens. She and her team allocate samples to laboratories working on research projects, whether internally (the Genoscope sequencing lab) or externally (e.g. outside microscopy or chemistry labs). She oversees the processing of samples and, working in concert with the Tara Pacific consortium and Genoscope, manages sequencing priorities.

A MinlON on board the Tara

In addition to her duties related directly to the expedition's goals, Julie Poulain also supervised testing of a new-generation device called the MinION, a nanopore DNA sequencer that enables in situ sequencing and yields data almost immediately. "As a result, we can quickly orient collection work and avoid a build-up of sample storage," comments Julie Poulain, who tested the MinION further during another oceanographic mission to study the sea floor in the North Atlantic. "We know more about the planet Mars than we do about the sea bed right here on earth," says Julie, ready for her next expedition.