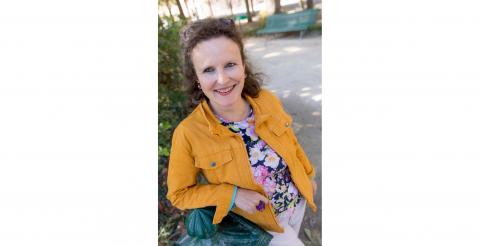 Jacqueline Bloch, a researcher at the Centre for Nanoscience and Nanotechnology (C2N - Université Paris-Saclay, CNRS), is immensely proud of her recent admission to the French Académie des Sciences. The physicist, who also teaches at the École Polytechnique and the Institut d’Optique Graduate School, is developing innovative experimental strategies for gaining a better understanding of the fundamental concepts of physics. She specialises in the use of polaritons, small particles of light, which she handles in samples of semiconductors to simulate various physical systems and study their properties.

The Centre for Nanoscience and Nanotechnology (C2N - Université Paris-Saclay, CNRS) is a unique laboratory, “a fantastic environment for developing new state-of-the-art structures,” researcher Jacqueline Bloch said happily. “Its impressive white room and its wide range of facilities allow researchers to take samples of semiconductors or other materials at a nanometric scale. There are very close links between the technicians, the engineers and the researchers - those who manufacture the samples within the lab and those who use them in their experiments.”

“A polariton is an excitation that spends half its time as a photon and the other half as an excited state of matter. This means they have mixed properties. They are photons ʻclothedʼ in an electronic excitation,” explained the researcher. Photons are trapped between two mirrors in a chamber. Matter in the middle absorbs the light and sends an electron in the semiconductor into an excited state. The electron returns to its initial state by emitting a photon, which is then reabsorbed again, and the cycle repeats. “Polaritons interact with each other, which means they can be used to simulate physical systems composed of interacting particles.”

Although her main interest lies in fundamental physics, Jacqueline Bloch incidentally creates original systems that have potentially applicative qualities. She and her team select the design of the chambers, sculpted at a micron level, and connect them as a network to trap light and simulate condensed matter. The honeycomb system, for example, simulates the physics of graphene, and the ring of six connected chambers simulates the physics of benzene. Using this latter structure, the researcher and her team invented a laser whose light rotates while spreading, like a corkscrew of light. This small orbital laser has interesting applications for storing information or for micromanipulation.

The visual aspect of these experiments is just as important as the practical one. “We make the physics concepts we create visible, which is very educational for students.” Researchers from various fields use these systems as a platform for studying other physics scenarios, such as black holes. “Quantum simulation is booming,” explained the researcher. “The idea is to simulate complex systems: instead of doing calculations, which are becoming more and more complicated to carry out, experiments are conducted in a larger system that is easier to control but that follows the same properties.”

At the French Académie des Sciences

The renown of this work comes from “the wide range of physics problems we study, thanks to the unique know-how developed here in the lab”, confirmed Jacqueline Bloch. Of all the honours she has received - the SFP Jean Ricard Prize 2015, CNRS Silver Medal 2017, Ampère Prize 2019 -, her admission to the French Académie des Sciences in late 2019 is the one that touches the researcher the most, as it means she is now part of “a great tradition”. Working in a team and training young scientists is, however, even more important to her. “Here, anyone can publish a couple of top-level articles. Sometimes, when my students defend their thesis, the members of the jury observe that each chapter could form the subject of a thesis in its own right.”

Although they are involved in basic research, her students often find positions in industry. “Industries are looking for profiles who can solve complex problems quickly. These are exactly the same skills that mean young people can have original ideas and do great physics,” observed Jacqueline Bloch. From this point of view, Université Paris-Saclay represents a “remarkable student talent pool”, and she intends to see those talents bear fruit.