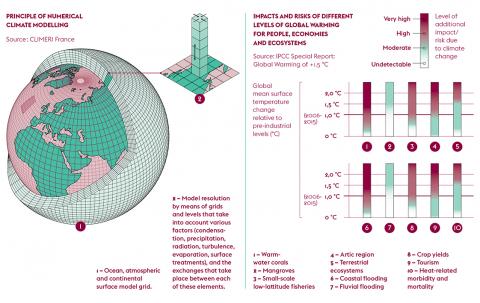 Scientists the world over are ringing alarm bells over the pressure exerted by human activity and climate change on global ecosystems and biodiversity. They are putting forward suggestions to combat the coming risks.

Time is running out. Never has there been a more pivotal year for the future of our planet and its inhabitants. All around, the scientific community is rallying together. Last year’s successive series of the latest Intergovernmental Panel on Climate Change (IPCC) publications, the latest digital simulations by the French research infrastructure on climate modelling (CLIMERI-France), and the Intergovernmental Science-Policy Platform on Biodiversity and Ecosystem Services (IPBES) report, are all evidence that drastic and urgent action is in order.

At the close of the 25th Conference of the Parties (COP25) climate convention in Madrid, the year 2020 begins with a program that reflects the scope of climate change and environmental issues: International Union for Conservation of Nature (IUCN) congress in Marseille, in June; 15th Conference of the Parties (COP15) for biological diversity in China, in October; COP26 on climate issues in Glasgow, in November. All governments asked to participate are aware it is absolutely necessary to dramatically reduce carbon emissions and other pressures on biodiversity, in order to lessen the impact of the crisis.

The aim of the 2015 Paris agreement – i.e. to limit temperature increase to 1.5 °C above pre-industrial levels – today seems to be increasingly uncertain. Current global warming is at 1 °C higher and every additional half-degree counts. All domains are already affected – biodiversity, oceans, fishing, agriculture, access to water, and health – and will be further impacted, threatening global food security. To avoid global warming of 2 °C by the end of the century, carbon emissions must decrease by 25 % by 2030 and reach net zero by 2070. To remain below 1.5 °C, these emissions must be slashed in half by 2030 and reach net zero by 2050.

The digital simulations by CLIMERI-France that were developed and released in September 2019 for the 6th IPCC evaluation report to be published by end 2021, are among the first within the Coupled Model Intercomparison Project (CMIP) in its current phase. The French models warn that warming by 2100 may be more severe than previously estimated: 6.5 to 7 °C higher compared to pre-industrial levels, according to the most pessimistic scenario of greenhouse gas emission pathways. “There are about twenty centres worldwide for climate modelling, and about thirty simulation models going up to 100 years,” explains Francois-Marie Bréon, deputy director at the Laboratory for Sciences of Climate and Environment (LSCE – Université Paris-Saclay, UVSQ, CNRS, CEA). “CLIMERI combines two French models: those of the Pierre-Simon Laplace Institute, with the participation of the LSCE and the Atmospheres, Environments and Spatial Observations Laboratory (LATMOS – Université Paris-Saclay, UVSQ, Sorbonne Université, CNRS), and of the National Centre for Meteorological Research.”

Climate experts tending to the planet

An organ of the United Nations created in 1988, the IPCC is one of the most important intergovernmental organisations contributing to enhancing knowledge on climate evolution. It aims to provide decision-makers with evaluations on climate change at regular intervals, in order to help them establish climate policies. These reports are based on scientific literature and present an objective and transparent synthesis, as well as adaptation and mitigation strategies. “The IPCC does not carry out independent research. It looks for where there is consensus. If observation or theoretical data is missing, and there is no clear physical relationship, it remains prudent by providing calibrated levels of confidence”, says François-Marie Bréon.

Three special reports, commissioned following the COP21, were published in October 2018, August 2019 and September 2019. They respectively cover the effects of global warming of 1.5 °C and of 2 °C, the impact of human activities and climate change on land surfaces, and the repercussions of climate change on oceans and the cryosphere (frozen components of the Earth system). For each, more than one hundred experts from dozens of countries rallied together and thousands of scientific publications, – up to 7000 for the ocean and cryosphere – were referenced.

The ocean and cryosphere in danger

The ocean and cryosphere, crucial to life on Earth, are hard hit. Until now, the ocean has absorbed more than 90 % of the excess heat on Earth, and 20 % to 30 % of anthropogenic CO2 emissions. As a result, its temperatures and acidity are rising. This warming has led to decreased mixing of temperatures between layers, less oxygenation and fewer nutrients for marine flora and fauna. The ocean thus becomes less hospitable, with adverse effects on fishing.

Similarly, glaciers, snow, ice and the permafrost – a layer of permanently frozen ground – are undergoing inexorable decline. The smallest glaciers may lose up to 80% of their current mass by 2100. Permafrost thaw is likely to become more widespread in the 21st century. Global warming well below 2 °C would lead to surface thawing of up to 25 %, but could reach 70 % if greenhouse gas emissions continue to increase sharply. Organic carbon contained by Arctic and Boreal permafrost, when released by thawing, would lead to a sharp spike in greenhouse gas emissions into the atmosphere. Landslides, avalanches, rockfalls and floods would be exacerbated, seriously impacting leisure activities, tourism and cultural assets. Today, 670 million people live in high mountain regions and the Arctic is home to four million people. These populations are among the most vulnerable to hazards and decreased water availability.

Melting glaciers and ice caps would lead to a rise in sea level: between 30 to 60 cm by 2100 if greenhouse gas emissions are strongly reduced and global warming is limited to 2 °C, and between 60 to 110 cm if business as usual continues. Rising oceans would mean that extreme events such as cyclones and storms cause devastating floods more frequently than in the past. 680 million people currently live in low-lying coastal zones and 65 million live on small island states.

Published in spring 2019, the IPBES report – equivalent to IPCC for global diversity – assessed the changes that had occurred these past decades in biodiversity and natural ecosystems. Hundreds of international experts combed through more than 15,000 scientific references, government sources and local and indigenous knowledge. Their conclusion is unambiguous: out of the eight million animal and plant species on Earth, about one million are now facing extinction. More than 40 % of amphibians, a third of reef-forming corals and marine mammals, a quarter of terrestrial vertebrates and fresh water, and 10 % of insects are in danger. Since 1900, the average abundance of species in their land-based habitats has fallen by 20 %.

Apart from climate change, four factors are to blame: a change in land and sea use, direct exploitation of certain organisms, pollution and invasive alien species. While the twenty Aichi biodiversity targets may not be met in 2020, some spin-off results are encouraging. “There are, for example, more protected areas, more resources allocated to nature conservation”, says Paul Leadley, of the Laboratory of Ecology, Systematics and Evolution (ESE – Université Paris-Saclay, CNRS, AgroParisTech) and main author of the report. At the same time, indicators of the state of biodiversity are in decline. “The problem is that the pressures on biodiversity continue to grow: land occupation, ecosystems steadily eroded by urbanism or agriculture, overfishing or illegal fishing, climate change, etc. So action must be led on two fronts: protecting biodiversity and relieving pressure.”

The loss of biodiversity is at once an environmental problem but also economic, societal and ethical. “Efforts have been made concerning certain pollutants, such as nitrogen or phosphates. But more are appearing, like plastics, which today are a real scourge”, says Paul Leadley. Since 1980, plastic pollution has been multiplied tenfold. “Biodiversity provides a service to mankind. Most of our food – more than three quarters of global subsistence crops – are pollinated by honeybees and other pollinators. With their decline, we can observe a decrease in agricultural yields”, says the researcher. In addition to all this, biodiversity figures greatly in medicine: 70 % of natural or synthetic anticancer drugs come from nature and close to 4 billion people rely mainly on herbal medicines.

“We must accept that all our actions have an impact on a global level, and that’s called telecoupling”, says Leadley. “For example, when you buy meat in France, it’s highly likely it comes from an animal fed on Brazilian soy. And that the palm oil in your snack is linked to deforestation.” Our actions may also be responsible for invasive species, “which pose a problem to local species in terms of occupation in ecosystems or health. The great majority are transferred by boat or plane, as commercial trade accelerates their introduction.”

In light of these observations, the IPCC and IPBES reports propose some solutions. By comparing different evolution scenarios and their impact by 2050, IPBES states that, assuming major societal transformation, it would be possible to halt the loss of indicators of biodiversity, maybe even improve them, and strongly reduce the rate of extinction of species. “We can still escape the worst”, confirms Leadley. The IPCC points out that apart from reducing greenhouse gas emissions, establishing durable land management, cutting overconsumption or food waste (because a third of food produced today is lost or wasted), halting forest clearing and burning, and decreasing wood fuel consumption are all relevant strategies to solve climate change tied to land surface effects.

Leadley approves, saying that “by limiting climate change as much as possible and by reducing pressure on ecosystems, species would become more resilient and resistant”. But this implies profound societal transformation. “For example, even if we don’t all turn vegetarian, we can feed ten billion people just by eating less meat, because a lot of pressure is put on land to feed cattle and sheep.” François-Marie Bréon continues: “To limit temperature rises to 1.5 °C, we need to cut out bad habits and increase sobriety, for example, by reducing aerial transport.”

“Just as for global warming, biodiversity must become a priority for all governments, enterprises, and citizens. It must be taken as a whole, so that societal changes can be more profound” concludes Leadley. A call for change that is reverberating ever more strongly, for the good of us all.