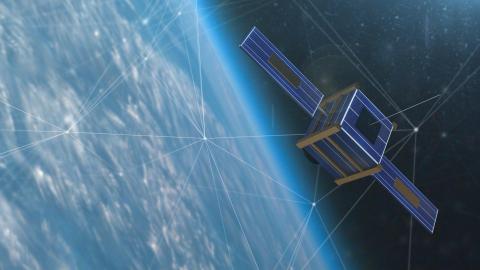 Created in 2021, ION-X industrialises a spacecraft propulsion concept from the Centre for Nanoscience and Nanotechnology (C2N - Univ. Paris-Saclay, CNRS, Univ. Paris Cité), in collaboration with Airbus Defence and Space (ADS).

ION-X was born from the meeting of Jacques Gierak, a research engineer at C2N, and François Auque, Director of Airbus space activities from 2000 to 2016, President of the investment fund Airbus Ventures until 2018, today partner at InfraVia Capital and volunteer advisor to the start-up; and Jean-Marc Schmittbiel, business manager at CNRS Innovation. "We are the perfect troika to lead this project!" Jacques Gierak enthuses.

The genesis of the project: a crazy idea

Jacques Gierak specialises in Focused Ion Beam (FIB), a nanoscale etching technology. It consists of generating a beam of fast and energetic ions via an optical system and using their kinetic energy to modify a substrate. It is used to verify compliance and prevent material failure in the semiconductor field. The scientist has also developed a liquid metal ion emitter and its associated instrumentation, a solution patented by the CNRS in 2001 and licenced exclusively to the German company Raith.

In 2009, Jacques Gierak turned to the space field because the Massachusetts Institute of Technology (MIT) asked him to test ion sources with ionic liquids used as fuel for space thrusters. In 2017, he was asked by the Centre national d'études spatiales (National Centre for Space Studies - CNES) to design an electrohydrodynamic thruster based on ion propulsion. For this project, he changed the scale of his work and began to design a system of massively parallelised beams to produce a propulsion effect. "I didn't want to reuse a traditional ion source production technology, because if research doesn't take risks, it's no longer research!" stated the scientist.

He then developed a new idea: instead of emitting ions via a single very fine tip, he conceived of making them start from a plane, namely a surface of one square centimetre. By putting thousands of transmitters in parallel, he intended to produce a multitude of very intense beams. In 2018, the project was supported by the CNRS pre-maturation programme to develop a demonstrator of the concept. "And from 2017 to 2021, we worked with Jacques to protect the technical means of this device with three patents and formalise the secret technical elements," says Jean-Marc Schmittbiel.

In 2018, a professor at HEC, where Jacques Gierak was taking the HEC Challenge Plus course and François Auque was giving lectures, had the feeling that a meeting between the two experts would lead to synergies. He put them in touch with each other and was right because the team specialising in space propulsion at Airbus was delighted to learn about the scientist's work, "They immediately concluded that this represented a major and unprecedented technological breakthrough in space propulsion," reports François Auque. The teams began a productive cooperation and the concept devised by Jacques Gierak evolved to meet the specifications of Airbus. "This type of cooperation, where we don't come with a ready-made solution but rather design together a demonstrator adapted to a need, is quite unusual for a project that was initially just a laboratory idea. That's how ION-X came into being," says Jean-Marc Schmittbiel.

Airbus supports the development of the project, and the measurement of propulsive quantities - which cannot be done in the laboratory, only in an industrial installation. The team, which aims to develop a 49 cm2 slab, is making good progress, leading François Auque to say, "It is not easy for a research organisation to understand the constraints of the industrial world. I admire the pragmatism shown by C2N, and the experience of CNRS in dealing with large companies. I am not surprised that many start-ups are emerging on the Université Paris-Saclay campus."

Wizard is a propulsive slab for medium-sized satellites (less than 250 kilos), measuring ten centimetres by ten centimetres and three thick. "For the same performance, today's engines are much larger and generally use xenon, stored in cylinders at very high pressure, which takes up much more space," says Jacques Gierak. François Auque adds, "The cost of launching the satellite depends on weight and volume, so this aspect is very important for a satellite manufacturer."

In addition, the thruster has high propulsive efficiency, because the bipolar emission produces an electrically neutral charge that can be maintained for a very long time. Its compactness frees up space for transponders, on-board electronics and equipment used for satellite missions. As it emits 100 times more particles per cm2 than current technologies, it plans to deliver thrusts of more than one millinewton (currently limited to 300 micronewton). And lastly, this engine lights up on demand. There is therefore no detection signature, which is important for certain applications where discretion is required.

ION-X: a start-up propelled to success

To launch the project, the venture builder Technofounders founded ION-X in 2021, with the scientific support of Jacques Gierak. It is hosted at C2N and led by entrepreneurs Yves Matton and Thomas Hiriart. The start-up already has around ten engineers working to industrialise the concept. To facilitate the transfer, C2N and CNRS are putting together knowledge files describing the technological elements used in the thruster, and ION-X is obtaining an exclusive operating licence. "It is very reassuring for investors to know that the start-up is backed by a laboratory capable of supporting industrialisation," explains Jean-Marc Schmittbiel.

The start-up raised $3.8 million in June 2022. It plans to offer customised thrusters, i.e. develop, with its future customers, the most suitable solutions for space missions. François Auque predicts a very promising future, "this innovation opens up a very wide field of use." In fact, "the presentation of our technology at the International Electric Propulsion Conference 2022 (IEPC) last June in Boston really made waves!" says Jacques Gierak. The engine is due to be launched into space in 2023 for a first demonstration flight in 2024.

And since the troika is not short of ideas and dynamism, it is launching a new project, supported by CNES and ADS, as part of the French Recovery Plan - which aims to revive the economy, particularly in terms of industrial recovery. The aim is to increase the performance of Wizard by developing a new generation of thrusters to meet the needs of ADS flight systems. Jean-Marc Schmittbiel concludes, "The transition from a disruptive innovation like this to the start-up ION-X was very quick, it's unusual and remarkable."