The international network of telescopes known as GRANDMA, in which researchers at the Laboratory of the Physics of the two infinities - Irène Joliot-Curie (IJCLab – CNRS, Université Paris-Saclay) play a key part, is enriching the multi-messenger approach to observing the sky.

Recent detections of gravitational waves resulting from the coalescence of compact objects represent a major breakthrough for various fields in physics such as astrophysics and cosmology, as well as fundamental physics (please see the section below ‘A look back at GW170817’). The first results of the O3 observation run by the LIGO/Virgo interferometers, which took place between April 2019 and April 2020, revealed new binary systems very different from those discovered up until this point involving massive neutron stars, such as the event GW190425, and extremely asymmetrical systems, such as the events GW190412 and GW190814.

To shed light on the many questions being asked, researchers are increasingly combining observations from different instruments. This is why many observatories are scanning the heavens when gravitational waves, gamma-ray bursts or neutrinos take place. Once an interesting signal is detected, it is important to quickly activate other instruments, such as ground-based telescopes in particular, in order to observe the source as efficiently and quickly as possible.

The challenge of this type of multi-messenger astronomy is the coordinated effort which it requires. An international network of telescopes, known as GRANDMA (Global Rapid Advanced Network Devoted to the Multi-messenger Addicts), has been responding to this for the past two years.

Set up by the ‘gravitational waves’ group at the Laboratory of the Physics of the two infinities - Irène Joliot-Curie (IJCLab – CNRS, Université Paris-Saclay), GRANDMA contributes to the missing link in the observing sequence. With its 25 telescopes spread across 20 observatories in both hemispheres, GRANDMA covers a large number of time zones and can carry out rapid and effective monitoring in the event of an alert. This network is capable of identifying the possible visible counterpart of a gravitational wave signal. 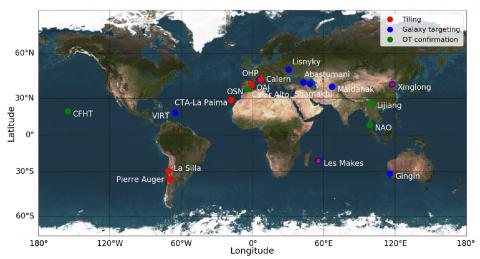 An algorithm developed by the ‘gravitational waves group’ from IJCLab in collaboration with GROWTH from America permits better optimisation of the characteristics of the telescopes in the network in order to maximise their use and observe large areas of the sky in the first few hours following a signal. The images are then quickly analysed using software developed at IJCLab to detect transient sources by comparing the data with reference images.

Identified candidates trigger new multiwavelength tracking, with rapid sampling, to extract their physical properties. This sequence of observations, containing up to several hundred images, is then studied and calibrated. This is the final step before a third sequence of observations using deep sky telescopes, such as the CFHT (Canada France Hawaii Telescope), the GTC in the Canary Islands or the VLT in Chile.

All of these operations and analyses are managed at the heart of GRANDMA by ICARE (Interface and Communication for Addicts of the Rapid follow-up in multi-messenger Era), a tool developed within IJCLab in partnership with the University of Western Australia (UWA) and hosted at the lab in the VirtualData cloud.

GRANDMA has demonstrated its effectiveness by tracking 90% of the alerts resulting from the LIGO/Virgo O3 observation run, with observations being triggered by the ground-based telescope network in less than 30 minutes on average. Analysis of the images has unfortunately not revealed any visible source associated with the gravitational wave sources as these have been generally too far away for any optical counterparts to be detected by the network. However, the limits reached by visible observations bring new constraints to models of electromagnetic emissions from gravitational wave sources.

GRANDMA has also initiated the kilonova-catcher participatory science project, which uses amateur astronomers from around the world to contribute to the monitoring of observations. Today, over 30 amateurs actively participate in observations using telescopes of a suitable size, comparable to those used by the ‘professionals’.

In order to meet the even greater demands of the next O4 observation run (planned between 2022 and 2023) which will be another quantum leap in the sensitivity of gravitational wave detectors, new developments and collaborations between the professional and amateur worlds are under way. GRANDMA and the Kilonova-Catcher astronomers will once again be ready to face the challenge of multi-messenger astronomy!