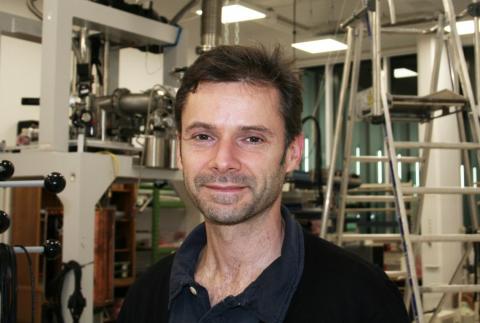 A researcher at the Centre for Nanoscience and Nanotechnology (a.k.a. C2N) at the Saclay research and university cluster near Paris, Frédéric Pierre has just received the Grand Prix Madame Victor Noury(1), awarded by the Académie des Sciences for his work in quantum mesoscopic physics.

Frédéric Pierre heads the "Quantum Physics in Circuits" team at C2N(2), one of the very few in the world to study how quantum physics influences the thermal properties of electronic circuits. He has played a major role in opening up this field of research.

Frédéric Pierre investigates how quantum physics influences the electric and thermal properties of nano-scale circuits. "I study the behavior of electrons that – due to their interactions and the laws of quantum mechanics – can give rise to very intriguing states of matter whose properties seem to have promising applications," he points out. "While applications are not my main concern, I do think about what my findings might contribute to society. For instance, if the aim is to engage in quantum engineering and build functional devices, it is important to first be able to describe their behavior during the assembly of their components."

Having developed unparalleled instrumentation, Frédéric Pierre is able to probe objects under observation by means of fluctuations in the electric current that shed light on their thermal behavior. Today, his team is one of very few to do experiments on the thermal transport properties of quantum electronic circuits. Their work paves the way for new methods of probing states of matter and a better understanding of their "non-conventional" aspects, and will be of interest in future in the branch of engineering dealing with "strongly correlated" materials.

Very early in life, Frédéric Pierre sought to "understand the laws of Nature." This led him to study physics, then specialize in a subdiscipline called mesoscopic physics, which deals with materials on an intermediate scale between microscopic and macroscopic. "This branch of physics is counter-intuitive, governed by quantum mechanics, and can be observed in the laboratory," he explains. For this inventive experimenter in fundamental research, it's magical when, in the lab, he actually witnesses the occurrence of a measurement only previously encountered in his imagination.

Of course, he takes pride in knowing that the Académie des Sciences has recognized the importance of his work. He feels that "research is driven by passion." At congresses and conferences, he makes a point of conferring with the international scientific community. "When you do research, it's important to communicate with your peers. Discussions of the latest advances often inspire collaborative projects and new developments."

(2) The Center for Nanoscience and Nanotechnology (Université Paris-Saclay) has just moved into a brand-new facility on the Saclay research and university campus. It houses the former Laboratoire for Photonics and Nanostructures (LPN) and Institute of Fundamental Electronics (IEF).

Graduating in physics from the prestigious Ecole nationale supérieure, then taking a post-graduate degree at the Laboratoire de Physique des solides (CNRS/Université Paris-Sud), he defended his doctoral thesis at the Condensed Matter Physics Laboratory, part of the French Alternative Energies and Atomic Energy Commission (CEA).  After two post-docs in the United States – one at Michigan State University, the second at Yale University – he joined the Laboratory for Photonics and Nanostructures of the French National Centre for Scientific Research (CNRS) in 2004.