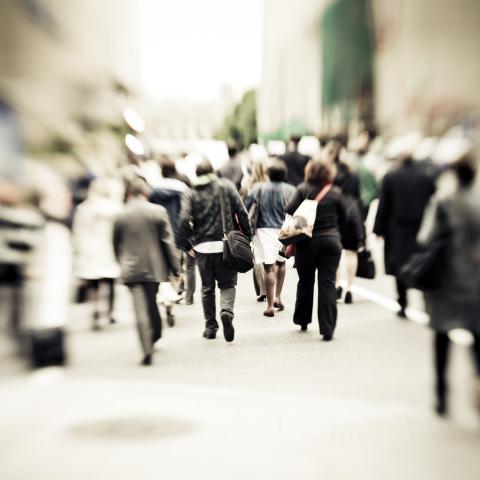 François Sarfati, a professor at the Pierre Naville Centre (CPN – Univ. Paris-Saclay, Univ. d’Évry) and Deputy Director of the Sociology and Political Science Graduate School, is a sociologist in employment and the workplace. His focus is on developing knowledge about uncertainty, particularly as regards reforms in education and labour institutions.

François Sarfati studied Economics and Sociology at Université Paris 1 Panthéon-Sorbonne, which he then continued at the Conservatoire National des Arts et Métiers (Cnam) where he defended his thesis in 2005. His thesis examined the mechanisms by which uncertainty in labour markets increases from the perspective of those who take advantage of it. François Sarfati has christened such people ‘victors of uncertainty’, which is also the name of the book he subsequently published with Presses Universitaires du Septentrion. “At the time, most sociologists were studying the situation from the point of view of those who had difficulty integrating into society, those who were in an insecure situation and those who had been made redundant, but very few were studying it from the point of view of those who were doing well.”

François Sarfati was taken on as a lecturer in a department of Social Sciences in 2006. There, the academic continued his research work by focusing on educational issues, particularly in higher education. To begin with, he investigated the subject of ‘dropping out’ at university, before extending his research into what are known as professionalisation policies in higher education, i.e. a set of measures which aim to bring students closer to the labour market. “By looking at people experiencing difficulties and at those preparing at university to join socially valued professions, the thinking behind the transformation of higher education could be better understood.” This gave him the opportunity to continue his research in the area of public policy making.

Throughout his research, François Sarfati has questioned the way policy makers think about public issues in order to better understand the tools they decide to use to address them. To do this, the academic carries out a field survey of all the stakeholders affected by the actions implemented. These include the policy makers, the designers of the mechanisms for public action, the people who implement them and those for whom they are intended. “Sociological analysis needs to provide an understanding of what’s going on throughout the entire chain, to show how questions are being asked, what answers are being formulated and to what extent they are having an effect on the problems.”

François Sarfati was recruited by the Centre for Employment Studies in 2011. In this interdisciplinary establishment, he could broaden and deepen his work on public policy, employment and inclusion issues. In 2018, he joined Université Paris-Saclay and the Pierre Naville Centre. Here, he has studied issues related to employment contracts, the managerialization of labour law and, more recently, remote working. He continues to focus on questions concerning work, employment and education.

Together with sociologist Camille Dupuy, François Sarfati co-wrote the book ‘Gouverner par l’emploi. Une histoire de l’École 42’ which has been published by Presses Universitaires de France in April 2022. It is the result of field studies carried out in France and Europe in School 42, a school for digital professions founded by Xavier Niel. “This institution conceived and promoted to be disruptive and different, is in fact just a magnified example of what’s seen in higher education.” Based on their observations, the authors show how contemporary societies are governed by employment. “There’s a tendency to assess all economic and social decisions in terms of their ability to bring people closer to employment. Work has become the central focal point around which society is organised.” This trend is spreading very widely in the field of education. Originally, teaching was all about the dissemination of knowledge and general culture. It was for educating the population. Now, it is entirely dedicated to enabling people to find a job and hold down a job. Students are required to learn to accept the jobs they are given, regardless of the conditions. “Basically, we educate people to adapt, to be instructed and to obey.” Whether it is unpaid internships, voluntary work, community work or, more recently, the ‘contrat d'engagement jeune’ (Youth Commitment Contract), which aims to facilitate a quicker entry into employment thanks to personalised support, these employment situations are always presented as an opportunity to develop skills and to enrich CVs in the hope of obtaining a more satisfying position. “However, by conveying the idea that these positions are better than nothing and are an opportunity to prepare for the future, we mainly teach those who obtain them to do without unemployment benefits, pensions or health insurance entitlements.”

An underlying trend: uncertainty as a norm

François Sarfati attributes this change to the idea that uncertainty is now a norm. It has become commonplace to have a succession of short contracts, to be self-employed and have no overview of your customers and to be subject to redundancy plans, etc. In addition, the persistence of endemic unemployment over the past 40 years has put employers in a position of power. “They have the ear of public authorities with whom they can negotiate changes in labour law to suit their needs.” The rhetoric used to achieve this is based on the premise that if the social system is too protective, it hinders activity and ultimately hampers the recruitment of new workers. “Public authorities accept being at the mercy of the market for the sake of jobs.”

François Sarfati became Deputy Director of the Sociology and Political Science Graduate School at Université Paris-Saclay in 2020. This new institution has over a thousand students, and around one hundred researchers and 120 PhD students from seven of the University’s research laboratories. The aim of this centre is to bring together key players previously scattered across the campus, to promote a cross-disciplinary approach and to encourage work on an international scale. “The international aspect is exciting. It means fieldwork can be carried out in different places and discussions can be had with colleagues abroad in order to develop the conceptual tools needed to understand changes in contemporary societies.”