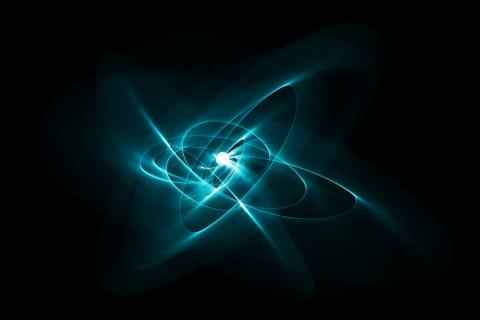 CORSAIR: Controlling the emission of light from ordered arrays of atoms

As an integral part of the research being carried out at the Charles Fabry Laboratory (LCF - Univ. Paris-Saclay, Institut d’Optique Graduate School, CNRS), the CORSAIR project (Controlled subradiance in atomic arrays) is using innovative protocols to study the emission of light in ordered arrays of atoms. Although still basic research, its potential in terms of quantum information storage, for example, is important.

The CORSAIR research project, which is being led by Igor Ferrier-Barbut, a physicist at the Charles Fabry Laboratory, is based on quantum physics. He is putting forward a new protocol for the study of the collective spontaneous emission of dysprosium atoms. At the end of 2021, the project won an ERC Starting Grant (a grant awarded to young researchers whose previous work has been recognized and which is designed to support them in more ambitious projects) and forms part of the study into light-matter interactions. Scientists at the LCF are amongst some of the first to control the subradiance (a specific phenomenon involving the spontaneous emission of light and its propagation) within disordered arrays. The goal at the moment is to improve the knowledge and control of this phenomenon using a set of ordered atoms.

The problem of light diffusion

CORSAIR is trying to solve the theoretical problem of the scattering of light in a free space by a large number of atoms. The response of atoms to the reception of light differs depending on whether they are on their own or in a group. On its own, an atom’s capacity to absorb light depends on the excitation state of its electrons. However, in a group, this capacity depends on the other atoms and the collective response is different. This brings with it several benefits, such as the storage of information in the form of photons or its controlled sharing. The challenge is to control these effects. The goal of the researchers working on the CORSAIR project is to optimally control the interactions between atoms using subradiance. “By externally controlling the ability of atoms to interact with each other using laser fields, we change their collective emission and it becomes possible to re-emit all their current excitation in a given direction.”

Normally, when laser light hits a cloud of atoms, the photons are absorbed by the atoms and the electrons move to a higher energy level in an excited state. The return to a ground state is done by the emission of a photon. However, in the case of subradiance in a cloud, the distance between each atom is smaller than the wavelength of the emitted photon and the emission is cancelled. The electrons remain in their excited state and all the excitation energy is trapped within the system. The emission can then be managed by scientists. Subradiance is where the interference between atoms is said to be destructive, as opposed to the superradiance which is where the interference is said to be constructive because the atoms emit photons.

Although Igor Ferrier-Barbut and his colleagues at the LCF have already succeeded in creating subradiance in disordered atomic clouds, CORSAIR is hoping to improve the reproducibility and control of this phenomenon in the case of ordered atomic clouds. “We want to achieve a re-emission of the photon and in a direction determined by us. We also want to store all the energy which has been sent to it in an array atoms, and conversely, to re-emit all of it at the appointed moment,” explains the researcher.

From trapping rubidium to trapping dysprosium

In their previous experiments, Igor Ferrier-Barbut and his colleagues used atoms of rubidium (Rb), an alkali metal. The unique feature of the CORSAIR project is the use of dysprosium (Dy) atoms from the lanthanide family. “Rubidium is the workhorse of atomic experiments. Like all the atoms in the alkali metal family (lithium, sodium, potassium, caesium, francium), it behaves in a relatively simple way when exposed to light. For our part, we want to open up new possibilities by using atoms whose internal structures and wavelengths are more favourable to the probing and trapping of these atoms,” explains the researcher.

The new trapping methods developed at LCF (using cooling lasers or optical tweezers) should also lead to a better handling of dysprosium atoms. Using these methods, scientists working on the CORSAIR project are hoping to be able to determine precisely where in an array of atoms the excited ones are located. It is like a clearer and more accurate photograph of atoms which still contain photons. The project will start with arrays of several dozen dysprosium atoms.