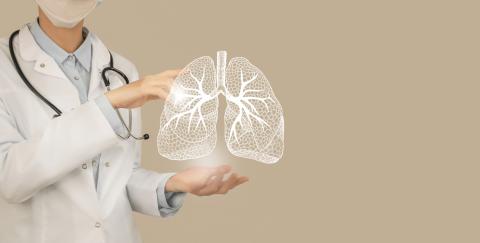 The programme Reveal, led by Benjamin Besse, a cancer specialist working at the Molecular Predictors and New Targets in Oncology Unit (PMNCO - Université Paris-Saclay, Gustave Roussy, Inserm), was selected in the 2021 call for university hospital research projects in health (RHU). It aims to develop new methods of diagnosing and monitoring patients with lung cancer in order to improve and simplify assessments.

Biological traces of lung cancer in humans could be detected using a blood test. This ambitious project, which has clear benefits in terms of public health, is called Reveal. The project was the 2021 winner of the university hospital research projects in health (RHU) call for proposals. Its aim is to develop practical applications which will transform medical practice in lung cancer care over the next five years. This disease is now the fourth leading cause of death in the world but remains difficult to diagnose and monitoring its progress is complicated as it requires regular use of medical imaging.

If the idea of analysing blood in order to look for signs of cancer seems simple in theory, in practice it is much harder to implement. There are no biological markers for lung cancer compared, for example, to prostate cancer and PSA levels. As a result, researchers are focusing on circulating tumour DNA. This is a fraction of free DNA which, following a process of cellular degradation, is found in the blood and signals the presence of lung cancer.

The Reveal project is building on work which, over the past decade, has been increasingly carried out on circulating DNA. Work involving the detection of fragments of foetal DNA in the blood of pregnant women has been the start of a major revolution in this field of medicine. “The arrival of these highly sensitive techniques opens up a whole range of future opportunities,” points out Benjamin Besse, a cancer specialist at the Molecular Predictors and New Targets in Oncology Unit (PMNCO - Université Paris-Saclay, Gustave Roussy, Inserm) and co-ordinator of the Reveal project.

These techniques, adapted to lung cancer, would offer a more accurate and simpler analysis of the disease for patients. They would also be more cost-effective and accessible. The project is utilising the academic strengths of Université Paris-Saclay, Gustave Roussy Institute, Inserm, University of Montpellier and CentraleSupélec, as well as the industrial knowledge of Stilla technologies and Cell-environnement (for the analysis techniques), to focus on issues around monitoring the evolution of lung cancer. “At present, there are two main types of approach. The first is the most developed and involves identifying the mutations present by analysing the tumour itself - for example a mutation in the KRAS gene - and then looking specifically for that mutation in the circulating tumour DNA,” explains Benjamin Besse. “Our partnerships with the above-mentioned biotech specialists were therefore a logical step. Stilla technologies has been very successful in developing technology for circulating tumour DNA, including digital PCR,” emphasises Benjamin Besse. The disadvantage of this approach is that it requires knowledge of the different abnormalities of each tumour for each patient.

This explains why researchers are also pinning their hopes on the second possible approach. This is the analysis of circulating DNA which does not involve having to know about mutations in the tumour itself. However, this means creating new tests which can detect a set of molecular abnormalities in a blood sample which are not specific to a given tumour. The test would be able to detect a range of abnormalities related to lung cancer as well as potentially other types of cancer.

Three objectives in one

Applications of the Reveal project are focused on three main areas. The first concerns the measuring of any residual disease after surgery or radiotherapy. Micrometastases sometimes persist after treatment for lung cancer and CT scans at present fail to identify them. “It’s possible to operate on patients who already have metastases, but as the imaging definition does not go much below 3 mm, we don’t know that they are there,” explains Benjamin Besse. This new type of liquid biopsy test would detect these residual traces and predict the risk of relapse, as well as possibly help to adjust postoperative treatment. With this new device, health workers would benefit from a better, faster and more accurate test compared to using a scan. “This would allow us to act much faster and not wait to treat metastatic disease,” emphasises Benjamin Besse.

The Reveal project’s second area of focus is about predicting the effectiveness of immunotherapy. “At present, about 80% of patients with metastatic disease are treated with immunotherapy, either alone or in combination with chemotherapy,” points out Benjamin Besse. Predicting patients’ levels of sensitivity to immunotherapy is a major challenge. The relevant biomarkers need to be identified and defined so that they can be patented and marketed. This is where the value of partnering with experts in analytical techniques (such as Cell-environment) lies. They can look at abnormalities in circulating cells to predict sensitivity to treatment.

The final research focus concerns the development and approval of a circulating DNA test which is capable of assessing the evolution of a disease at an advanced stage in a patient under treatment (immunotherapy, chemotherapy, etc.) more quickly and more accurately than medical imaging. Immunotherapy can also cause lymph nodes to develop. This response, which is a reaction to treatment and not a sign of metastasis, remains difficult to see on a CT scan. “The aim is to reduce the need for CT scans, to gain a better understanding of the disease, and therefore to simplify and improve follow-up at all stages of the cancer,” summarises Benjamin Besse. The tests would be less demanding for patients than the radiation they are exposed to during a scan.

For patients and because of them

“The history of circulating DNA at Gustave Roussy goes back a long way,” says Benjamin Besse. By focusing on the development of technologies and tools based on circulating DNA, the Institute very quickly turned its attention to circulating biomarkers, particularly through the sponsorship of researchers by the Gustave Roussy foundation. For the past ten years or so, Benjamin Besse has been collecting plasma from thousands of patients before and after treatment and storing it in a freezer.

This really quite vast selection of samples has been a necessary asset in the development of new tools today. The samples have been a precious resource in the development of the first investigations and first demonstrations of utility, etc. “It’s also thanks to the patients that we have been able to develop the Reveal project. It probably contributed to the fact that it was selected in the RHU call for projects. It's a nice tribute to them,” says Benjamin Besse in conclusion.