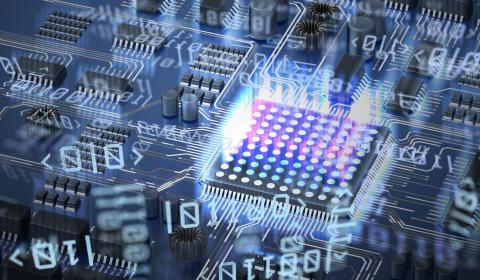 Antoine Browaeys is a researcher at the Charles Fabry laboratory (LCF – Univ. Paris-Saclay, Institut d’Optique Graduate School, CNRS). He directs research into the capture of individual atoms and the control of their interactions. The researcher, who has a background in the manipulation of neutral atoms, applies his skills to studying the quantum properties of a large number of interacting atoms. His work has led him to being at the forefront of current international research into quantum computing, where he is focusing on an approach using cold atoms. The start-up Pasqal, which he co-founded in 2019, is now steering this research towards industrial applications. The French Academy of Sciences has recently awarded the researcher the Alfred Verdaguer - Fondation de l’Institut de France 2021 prize.

Antoine Browaeys graduated from ENS Cachan (ENS Paris-Saclay today) and passed his ‘agrégation’ (a teaching diploma in France). He has always worked in the area where quantum physics, particle physics and optics overlap, as well as in the field where theoretical physics and experimental physics have common ground. In 1997, following his military service which he spent as a contingent scientist at the Institute of Optics Graduate School, he decided to study for a PhD at the Charles Fabry Laboratory under the supervision of Alain Aspect. His subject, which was seen as experimental, involved developing a laser cooling experiment for metastable helium gas. The idea was to observe whether this gas led to a quantum state known as a ‘Bose-Einstein condensate’. Two years earlier, the American researchers Eric A. Cornell, Wolfgang Ketterle and Carl E. Wieman succeeded for the first time in producing this state of condensation which could not be equated to any previously known solid or liquid form. They were awarded the Nobel Prize in Physics in 2001.

The first steps: the manipulation of cold atoms

Bose-Einstein condensate is a state of matter at very low temperature in which all atoms have exactly the same quantum properties. The experiments by the Nobel Prize-wining American scientists were mainly carried out using rubidium. Antoine Browaeys was interested in extending this into working with helium. From this period onwards, the young researcher developed technical and theoretical knowledge in the manipulation of cold atoms. One of the methods used for manipulating gas atoms is to cool them. At a temperature as close as possible to absolute zero (0 K or -273,15 °C), the speed of atoms is reduced to such a level that they are almost immobile. This is done by continuously sending several laser beams in opposite directions to the movement of the atom in order to block this movement. “If you ran towards me and I threw a ball at you at high speed, you would move backwards and your speed would be reduced. In the same way, we can slow down an atom which is initially moving at several hundred metres per second to a speed of a few metres or even centimetres per second,” explains Antoine Browaeys.

With his PhD under his belt, Antoine Browaeys set off to the United States in the year 2000, where he furthered his knowledge of Bose-Einstein condensates. It was still an emerging field of study at this time. When he returned to France, he was recruited by the CNRS and altered the direction of his research. He returned to the Institute of Optics Graduate School, where he became part of Philippe Grangier’s team. Philippe Grangier is one of the pioneers of quantum optics in France. With this, Antoine Browaeys moved from handling cold atoms to handling individual atoms. Although the approach used is quite similar, the challenge this time was to cool only one atom in order to trap it with a specific laser beam called an ‘optical tweezer’.

This method of trapping individual atoms laid the foundations for the generation of quantum computer qubits. In a conventional computer, information is coded in binary form using a flow of electrical voltage in the form of bits whose value can only be 0 or 1, whereas in a quantum computer, the atoms simultaneously occupy the two states of 0 and 1, which generates qubits. This ‘quantum superposition’ has the potential to increase the computational capabilities of a quantum computer tenfold.

To achieve this, after trapping the atoms individually, the next step is to create ‘quantum gates’ between these atoms by making them transit through a very high electronically excited state called a ‘Rydberg state’. This state is essential for the atoms to interact with each other. The ultimate challenge is to successfully replicate all these steps with as many atoms as possible.

Antoine Browaeys and his colleagues have now succeeded in making more than 200 atoms interact, a record for qubit systems based on cold atoms. The platform developed by the team is still at the stage of a 'programmable quantum simulator' rather than that of a quantum computer. “We’re building artificial quantum systems in order to explore particular properties which cannot be calculated using conventional computers because the operations are too complicated. As we know how to create artificial systems governed by highly simplified equations which normally represent the actual system, the idea is to solve these equations by running the quantum simulator. Each time an atom is added, it doubles the computing capacity."

An outlet: the development of the start-up Pasqal

Antoine Browaeys, with the support of a whole multidisciplinary team of researchers, co-founded the Pasqal start-up together with Georges-Olivier Reymond. Funded in particular by the Ministry of Armed Forces, Pasqal has a twofold objective, namely to technically improve the quantum simulator with the aim of making it transportable, and offering applications in everyday life, such as solving logistical problems. The start-up supports EDF, for example, with issues involving optimising the charging of electric vehicle fleets. “Let's take a city, which has a fleet of electric cars but few charging points. The optimal situation would be to always have a minimum number of cars to meet requirements. It’s a very complex problem which a conventional computer doesn’t have the capacity to solve. Until now, we’ve used heuristic methods which are more like 'feeling'. The goal of our platform is to find the optimal solution,” explains Antoine Browaeys.

Will there be quantum computers in the near future?

According to Antoine Browaeys, the race for quantum computing remains a very long-term goal. Current research and applications are rather simplified simulations of complex quantum realities. These simulations nevertheless lead to calculations which are more significant than those possible with conventional computers. However, the race has picked up speed in recent years as international competition has increased. Alongside Antoine Browaeys’ work, others are now suggesting using neutral atoms without a Rydberg state, trapped ions or superconducting circuits.

Even if the quest for quantum computing does not succeed, there is one final argument in favour of quantum platforms. “A quantum computer uses up much less energy than a conventional computer to perform the same functions. While the latter consumes tens of megawatts to solve a complex problem, quantum machines consume tens of kilowatts - a thousand times less. Being able to encode information more efficiently helps to reduce the environmental impact,” says the researcher in conclusion.