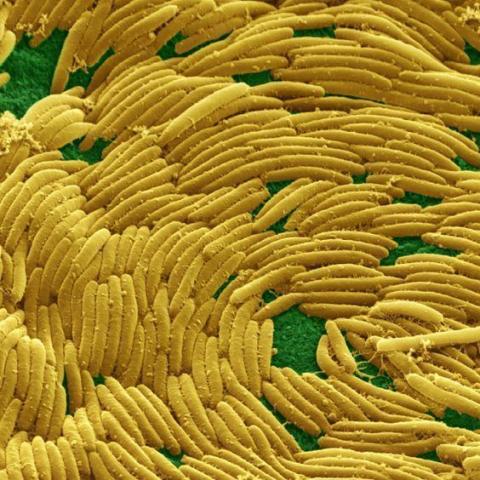 An amazing protein that regulates the mobility of bacteria

Researchers at Université Paris-Saclay have just discovered the unusual properties of a protein involved in bacterial motility.

Many bacteria are motile, which means that they move in their environment. To do this, they have very complex protein assemblies that organise and coordinate their movements. However, these bacteria in motion sometimes have to change direction.

Jacqueline Cherfils and her team Structural biochemistry of small GTPases at the Laboratory of Biology and Applied Pharmacology (LBPA - Université Paris-Saclay, ENS Paris-Saclay, CNRS), in collaboration with a team from Marseille, have studied these molecular mechanisms in Myxococcus xanthus, a bacteria that moves and changes direction in a coordinated manner.

Two proteins mainly determine the direction of movement of this bacteria: MglA and MglB. MglA belongs to the large family of small GTPases, which are found in all areas of life. These proteins generally exist in two forms, active or inactive, and regulate a number of biological processes by moving from one state to another. MglB is responsible for the inactivation of MglA.

In the moving bacteria, MglA and MglB are located opposite each other, with MglA at the front of the bacteria and MglB at the back. When the bacteria change direction, MglA and MglB reverse their position, which means that a messenger carries this information between the two proteins. Until now, the identity of this messenger has remained mysterious.

In their study, the researchers showed that this messenger was none other than the small GTPase MglA, which exhibited not two but three states, two active and one inactive. One of the active states would be the messenger, and the inactive form of MglA would assist the conversion between the three states.

In addition to shedding important light on the molecular mechanisms of M. xanthus motility, the discovery opens up a new field of study: the search for three-state GTPase in other living organisms.