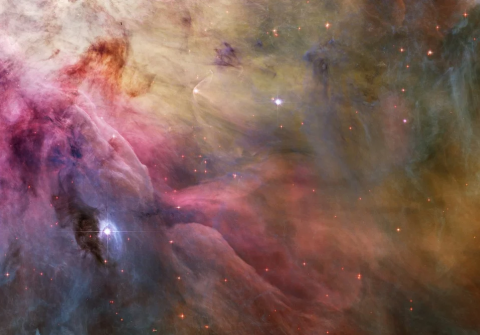 Galaxy and star formation in the eye of ALMA telescope

Astrophysicists, including some from Université Paris-Saclay, are probing space with the ALMA radio telescope and are providing new insights into the formation of galaxies and stars.

ALMA (Atacama Large Millimeter/submillimeter Array) is a radio telescope inaugurated in 2013. It is composed of 66 antennas, each several metres in diameter, and works in synergy as a single giant telescope thanks to the interferometry technique. ALMA is particularly suited to the observation and characterisation of remote areas of the universe, previously invisible or inaccessible to measurement.

ALMA allows new fields of investigation to open up, providing a better understanding of the history of our universe. The very distant galaxies appear as they were in the primordial universe, and thus inform scientists about their origin and evolution and those of the stars.
Dark disks where stars form

A collaboration of international researchers from different scientific centres, including some from the Astrophysics, Instruments, Modelling Laboratory (AIM - Université Paris-Saclay, CNRS, CEA), has been particularly interested in galaxies experiencing intense star formation. These galaxies were situated in the ultra-deep field of Hubble, a region of the southern hemisphere of the celestial sphere located in the constellation of the Furnace. The Hubble Optical Space Telescope has previously photographed this remote region of the universe.

Scientists tried to describe these galaxies more accurately than before. They observed them with ALMA and compared the data with Hubble's results.

While Hubble's ultraviolet images showed the existence of several star clusters within the galaxies, ALMA's observations indicated that most of the stars do not originate in these galaxies. Their birthplace was located in a disc-shaped dark zone in the centre of the galaxies observed. The clusters only contained between 1 and 7% of the total number of stars in formation. These discoidal structures were also found in previous studies, after analysis of the collected data.
On the carbon monoxide track

Galaxies are home to many gases that provide scientists with information about the identity of each galaxy. By characterising their gas composition, astrophysicists try to better understand their evolution and that of the stars they contain. Carbon monoxide (CO) is the second most abundant gas, after helium (He2), in galaxies hosting the birth of stars. Since helium is relatively difficult to quantify, the detection of carbon monoxide is increasingly becoming a means of study favoured by astrophysicists. Its emission spectrum provides valuable information about the nature of the objects being observed.

The international collective of researchers selected several distant galaxies and measured carbon monoxide emission profiles. They identified different types of galaxies: those with a star formation rate proportional to their stellar mass (main sequence), those with star formation bursts (many stars formed relative to their stellar mass), and those called passive (very few stars formed).

Scientists noted that galaxies in the main sequence represented the largest storehouse of gas in the observed regions. Galaxies with starbursts constituted a significant part of the star formation, but less important in remote regions. Passive galaxies, on the other hand, seemed to mobilise a significant amount of gas in the less remote regions, where they were more numerous. Another study sought to understand how stars were formed from gas clouds. Researchers showed that in dwarf galaxies, most of the gas was found at the periphery, while most stars formed in the centre of the galaxy. They suggested that the formation of stars might have dragged the gas to the periphery.

These discoveries offer new perspectives in the study of the distant universe and the understanding of the origin of galaxies and their stars. These distant galaxies, which now seem more accessible, still hold many secrets that scientists are only beginning to unravel.