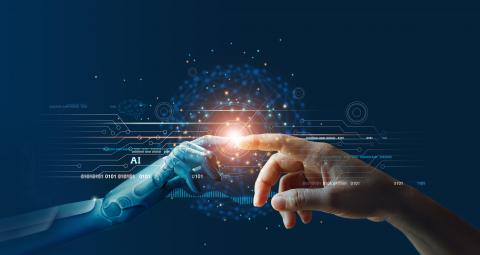 The LISN - a new digital science laboratory at Paris-Saclay

The “Laboratoire interdisciplinaire des sciences du numérique” (Interdisciplinary Laboratory of Digital Sciences) - LISN (Université Paris-Saclay, CNRS, CentraleSupélec, Inria) has now been created following the merger of two of the University’s laboratories. Its multidisciplinary nature makes it unique in Europe. Its scientific fields are numerous and its researchers are internationally recognised.

The LISN was created on 1 January 2021 as a result of merging teams from the “Laboratoire d'informatique pour la mécanique et les sciences de l'ingénieur” (Computer Laboratory for Mechanics and Engineering Sciences) - LIMSI (Université Paris-Saclay, CNRS) and the “Laboratoire de recherche en informatique” (Computer Science Research Laboratory) - LRI (Université Paris-Saclay, CNRS). CentraleSupélec and Inria are also partners of this new laboratory. It is positioned as a multidisciplinary research centre of worldwide importance and covers a wide range of basic and applied research in digital sciences. Its focus is to approach these disciplines, and more particularly artificial intelligence, in a varied way. Its team includes specialists in mathematics and computer science, mechanics, linguistics, psychology, and sociology. Sophie Rosset, a researcher in the field of dialogue and dialogue systems, and director of the laboratory, points out “All these fields use advances in artificial intelligence to further their research, and the digital sciences also benefit from their work to develop new models and innovations. This continuous give and take is of great value to our laboratory.”

One laboratory, but five departments

LISN is made up of five departments. They specialise in algorithms, learning and computing; data science (which covers bioinformatics, networks, the semantic web and knowledge management); energy and fluid mechanics; language science and technology (in particular for developing automatic language analysis models) and the study of interactions with humans in order to improve the relationships people have with the various machines which surround them. This is illustrated, for example, by the development of simplified access to knowledge sets and the visualization of heterogeneous masses of data. This department is already one of the largest research centres in the area in Europe and the diverse nature of its experimental platforms makes it unique in its field. These are immersive installations mainly used for applications which require three-dimensional interaction with complex data. Examples include Wild & Wilder which displays up to 130 million pixels and combines overviews and features, or EVE (Evolutive Virtual Environment) which is a multi-user, multi-sensory-motor virtual reality system for tracking people and objects in three dimensions. LISN is also developing technology capable of studying languages in all their various forms (written, spoken and signed), especially those for which few digital resources exist.

LISN also houses Fablab Digiscope - a digital fabrication workshop and a department in its own right in the laboratory. It welcomes the public and works in close collaboration with the Human Interaction Department and the Fluid Mechanics Experimental Unit, in particular for the making of tools.

Having a cross-disciplinary nature is in the DNA of LISN. For example, several teams (particularly those dedicated to bioinformatics and automatic language processing) are currently carrying out work on Covid19. This is the Covid-nma project which, using digital science, integrates all available data sources from global research on the epidemic. Thanks to this collection of information, all the tests carried out and their results are presented in the form of a dynamic and interactive summary. This greatly simplifies medical education planning and access to information.

Many other lines of research are being developed in the laboratory. These include the study of ethical issues related to conversational robots (chatbots) and the use of artificial intelligence in general, the analysis and visualisation of regional languages on interactive and sound maps, machine translation, design of 6G or Edge telecommunication networks, development of tactile wheelchair control systems and experimentation on the impact of research on greenhouse gas emissions. For Sophie Rosset “Digital sciences are one of the only scientific disciplines capable of bringing together so many different fields within a single laboratory.”

The LISN works together with many large companies such as EDF, Thales and Facebook as well as with SMEs such as Davi, an artificial intelligence platform editor specialising in chatbot design. It also works with start-ups such as The Artificial Intelligence Institute, which specialises in personalised learning based on artificial intelligence. The laboratory also collaborates with public industrial and commercial institution (EPIC), such as the French Alternative Energies and Atomic Energy Commission (CEA), the National Laboratory of Metrology and Testing (LNE) and the National Office for Aerospace Studies and Research (ONERA). All these partnerships open the way to scenario-based research, i.e. to new questions, and as a result new research directions and projects. “These joint projects give us the opportunity to experience the reality in the field, as well as validate methods developed in the laboratory,” says Johanne Cohen.

Several of the laboratory’s researchers have received international awards - proof if it were needed of the quality of the research carried out within LISN. Wendy Mackay has been recognised as an ACM Fellow (Association for Computing Machinery) for her contribution to research focused on human–machine interaction (HMI) and for her commitment to the association's Special Interest Group on Computer-Human Interaction. The Visualization and Graphics Technical Committee (VGCT) at the Institute of Electrical and Electronics Engineers (IEEE) this year awarded Jean-Daniel Fekete the Technical Achievement Award for his work on visualisation. Lori Lamel has been recognised as a Fellow by the International speech communication association (ISCA) for her significant contribution to speech science technology. She is also a member of the association's board of directors. And finally, Yannis Manoussakis has been named a senior member of the Institut universitaire de France (University Institute of France – IUF) for five years in order to gather together the world's research on his favourite area - the edge colouring of graphs.

“The LISN, with its scientific projects, excellent teams and ambition to welcome more and more activities and to recruit new researchers, can look to the future with confidence. In addition, our research activities have already gained a high national and international profile,” says Sophie Rosset.