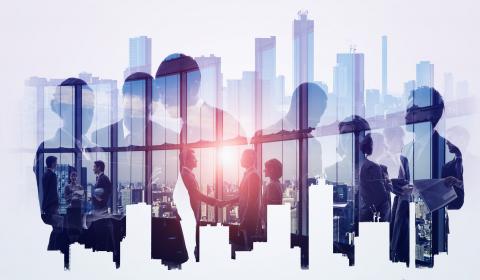 Élodie Béthoux: Employment in all its forms

Élodie Béthoux is a sociologist in employment and industrial relations and deputy director of education at the Graduate School Sociology and Political Science at Université Paris-Saclay. For the past fifteen years, she has been looking at the evolution and impact of public mechanisms which govern industrial relations within national and international companies. Until recently a lecturer at ENS Paris-Saclay and member of the Institutions and historical dynamics of the economy and society (IDHES - Univ. Paris-Saclay, Univ. d’Évry, ENS Paris-Saclay, CNRS Univ. Vincennes-Saint-Denis, Univ. Paris-Nanterre, Univ. Panthéon Sorbonne), she joined the Professions, Institutions, Temporalities laboratory (PRINTEMPS – Univ. Paris-Saclay, UVSQ, CNRS) at the start of the 2021/2022 academic year.

Industrial relations is an interesting subject as it is where economics, sociology and law meet. Élodie Béthoux is interested in how the rules governing work and employment, in which institutions (the state, trade unions and employers' organisations) and their stakeholders (employees, trade unions, employers) are involved, come about. “My research is conducted from an institutional point of view,” she explains. “This field of research is typical of the work carried out at IDHES and brings together sociologists, historians, economists and managers to address these issues. They provide complementary and useful insights into this research subject. ”

From Cachan to Saclay, via Nanterre, Johannesburg and Calcutta

A student of the Department of Social Science at ENS Paris-Saclay, Élodie Béthoux studied a joint course in Sociology and Economics at Université de Nanterre. During the year of her Master’s in Sociology, she spent six months at the University of the Witwatersrand in Johannesburg. There, she studied the reform of the South African collective bargaining system in the post-apartheid period as part of a project for the International Labour Office, and her Master’s thesis focused on this. “It was towards the end of the 1990s,” she remembers. “Just a few years after the election of Nelson Mandela and at a very important point in history.”

On her return to France, the young researcher obtained the ‘agrégation’ (teaching qualification) in Economic and Social Sciences at ENS Paris-Saclay and decided to take a sabbatical year to travel. She went to India, where she completed a five-month placement at the Alliance Française of Bengal in Kolkata, before returning to ENS Paris-Saclay. Élodie Béthoux then participated in a research project at the IDHE laboratory (now IDHES) on the development of Social Europe, to which she devoted her Master’s 2 thesis in Social Science, followed by a thesis on European works councils, which she defended at Université de Nanterre in 2006. The following year, she was employed as a lecturer at ENS Paris-Saclay. In 2018, she spent fourteen weeks as a visiting scholar at Cornell University in Ithaca (United States). In the autumn of 2020, she obtained her ‘Habilitation à diriger des recherches or HDR’ (authorisation to direct the research of others – a post-doctoral degree) on the controversial concept of social dialogue, before becoming a professor at UVSQ.

“After my thesis, where I was interested in the gradual appropriation by European employees of a new employee representation body established by a European directive in the early 1990s, I continued to work on employee information and consultation mechanisms and on collective bargaining processes in companies,” explains Élodie Béthoux. Today, the researcher is taking part in evaluating the so-called ‘Macron’ orders of 2017 for France Stratégie. “These orders introduced the social and economic committees (CSE) which replaced the former works councils, health and safety committees and staff representatives. A major overhaul of the system of employee representation in companies has taken place.” Since May 2021, the sociologist has also been taking part in the ANR ProVirCap project on ‘Professionals of the virtue of capitalism’. The aim is to study the managers of large companies in charge of corporate social responsibility (CSR) issues, with an approach which draws together the sociology of politics, work, professions, organisations and gender.

The effects of working remotely

When Élodie Béthoux looked into the effects of the health crisis, she identified two aspects. “The first is the massive use of remote working and how this has affected how people organise themselves in their workspace and time frames. The second concerns relations between management and employee representatives, and is what interests me in particular for two reasons,” says the researcher. “On the one hand, new subjects for collective bargaining are emerging to govern these new practices. As a result, a national interprofessional agreement on remote working, directly linked to the health crisis, was ratified last November 2020. On the other hand, remote working affects the way employee representatives can work, as they have less direct, daily contact with employees.”

The sponsors of Élodie Béthoux's research are primarily public administrations. She responds to their calls for projects alongside other researchers from different disciplines and laboratories. “A few years ago, for example, I co-directed a qualitative post-survey following the REPONSE statistical survey which the Ministry of Labour - the Directorate for Research, Studies and Statistics (Dares) - carries out every four years to provide a more detailed picture of national industrial relations.” The researcher has also worked with trade union organisations. Ten years ago, for example, she worked with CFDT (French Democratic Confederation of Labour) on employment negotiations in companies undergoing restructuring, or the CFE-CGC (union of professional and managerial staff). She has written a book about this together with three colleagues. “Since then, I have been a regular speaker at trade union training sessions to give feedback on our research work,” points out Élodie Béthoux.

The sociologist has also worked with the public sector. For example, a few years ago she studied the public/private boundaries of the SOLEIL synchrotron when the facility adopted a private status which brought together researchers (CNRS, CEA) and employees under private law. This issue is at the heart of her contribution to a recent international project on corporate bargaining and inequalities at work.

The place of Social Science at Université Paris-Saclay

In her role as an academic at ENS Paris-Saclay, Élodie Béthoux teaches Master’s 1 and 2 students about research during, for example, the ‘Publishing in the Social Sciences’ seminar, which is very well received. “I encourage them to get to grips with different aspects of the research profession at an early stage, including writing and publishing papers based on their work. I share my own editorial experience with them, as I belong to three editorial boards (‘terrains & travaux’, which is supported by MSH-Paris-Saclay, the ‘Année sociologique’ and the ‘Revue française de sociologie’). It’s important to give them the keys to finding their way about the numerous existing journals, to distinguish between general and specialist journals and to identify the characteristics of each.”

Élodie Béthoux managed the Master’s in Sociology course at Université Paris-Saclay for many years. Today, as deputy director of training at the Sociology and Political Science Graduate School which involves a thousand students, she is committed to “building cross-disciplinary and collective dynamics.” “We have an interdisciplinary seminar project, and we’re focusing on common issues, such as open science or Big Data. The perspective and contributions brought by Humanities and Social Sciences play a vital part in this. It's very stimulating,” says the researcher in conclusion.