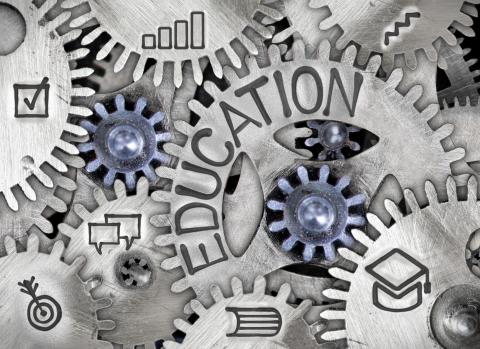 Catherine Berrier: from the construction to the transmission of knowledge

Catherine Berrier is a professor of biology at Université Paris-Saclay and is responsible for the 1st-year of the Master’s degree Teaching, Education and Training Professions (MEEF), in the path Life and Earth Sciences at the Faculty of Sciences of Orsay. She is also responsible for this study path for the entire Versailles Academy. After almost 30 years of teaching in preparation for the competitive teaching exams, and research activity that took her from bacteria to the brain, she is now dedicated to cross-disciplinary missions devoted to teaching professions: she is in charge of the teacher training service at the Faculty of Sciences of Orsay and holds the position of Deputy Director of Education at the University's Education Graduate School.

Research that took her from bacteria to the brain

Catherine Berrier owes the first 20 years of her career in research to a decisive meeting with Alexandre Ghazi, head of the Ion Channels team at the IBBMC. Within this team, which she joined during her PhD thesis, her work focused primarily on the production and purification of prokaryotic and eukaryotic mechanosensitive ion channels, followed by their electrophysiological study after reconstitution in artificial lipid systems. "We were a small team, with an average of only two or three staff members, but we were conducting particularly stimulating research at the interface of two types of approach - borrowed from biochemistry and electrophysiology - and two worlds - prokaryotic and eukaryotic," remembers Catherine Berrier. This work led to the discovery of ion channels in the cytoplasmic membranes of bacteria and demonstrated their involvement in bacterial osmoregulation. These channels then became model systems for the study of mechanosensitive ion channels in general.

In 2009, she began a collaboration with the Biochemistry and Pharmacology of the Synapse team, led by Hervé Daniel. "Based on my expertise in membrane biochemistry, I proposed a structural and functional study of the neuronal glutamate receptor (mGuR4), a G protein-coupled receptor," explains Catherine Berrier. This initial experience allowed her to join this team in 2012 to work on synaptic transmission, a theme to which she devoted the next five years. "While I found this change of theme exciting, as it led me from bacteria to the brain, I was forced to realise at the end of the 2010s that I could not really carry out my research activity, my teaching and my many collective responsibilities at the same time, without sacrificing one of them. So I decided at that time to focus on teaching," she explains.

On the border of two educational ecosystems

On the teaching side, Catherine Berrier considers herself to be on the border of two educational systems: higher education and secondary education. And for good reason, as in 1993, she was appointed as a lecturer at the IUFM of the Versailles Academy - an institution renamed ESPE and then INSPE during the reforms, and whose twofold objective is to provide disciplinary, didactic and professional education and preparation for the national competitive teaching exams for future teachers in schools, colleges and high schools. She then began, and never stopped, teaching biochemistry, cell biology and animal biology at the Faculty of Sciences of Orsay, mainly in the educational courses for future teachers of life and earth sciences (SVT). "My foray into the world of national education even led me to be a member of the national jury for the Certificate of Aptitude for Teaching in Secondary Education (CAPES) for four years, and more recently, President of the baccalaureate jury," adds Catherine Berrier.

Two years after her appointment as a lecturer, Université Paris-Sud entrusted her with the de novo implementation and responsibility of a year of preparation for the CAPES SVT, and then, in 2008, with the implementation of two years of the Master's degree in Teacher Training in SVT. "At the same time, I was appointed Head of the MEEF Master's degree in the SVT path at the Versailles Academy, a position I still hold today, and made responsible for this Master's degree at the Faculty of Sciences of Orsay, with Magali Gallezot, a lecturer in SVT as co-leader for the professionalisation aspect." A profound overhaul of the education courses was then undertaken and benefited many classes of students, who achieved a success rate for the CAPES SVT that was two to three times higher than the national success rate.

A number of collective missions

In addition to her teaching activities, Catherine Berrier has not hesitated, throughout her career, to become involved in various bodies of the Faculty of Sciences of Orsay, Université Paris-Saclay and the INSPE of the Versailles Academy. She put her knowledge of education in the teaching professions, its evolution and its various management systems at the service of a number of missions. In 2019, she accepted the position of head of the teacher training department of the Faculty of Sciences of Orsay, which includes six courses (MEEF and preparation for the internal 'agrégation' in "hard" sciences), and the position of prefigurator of the Education Graduate School of Université Paris-Saclay.

It was therefore only natural that in 2020, she became Deputy Director of Education for the Education Graduate School, which she considers to be "a formidable lever for increasing the visibility and value of the initial education in teaching professions within our university." Since the creation of the Graduate School, she has contributed to the implementation of actions to bring the parties involved in the Graduate School together. "Some of these actions have been very successful, such as the work day on the Dare, Create and Experiment teaching unit we organised for teachers; the study day for MEEF Masters’ degrees on the theme of education for sustainable development, which involved more than 150 students from different study paths and disciplines; and the graduation ceremony in March 2021, which brought together nearly 300 guests to honour the hundred or so graduates present. In the future, we hope to continue and strengthen this type of federative action, and also forge links with potential partners, such as other Graduate Schools, the Paris-Saclay Undergraduate School and INSPE," Catherine Berrier concludes.