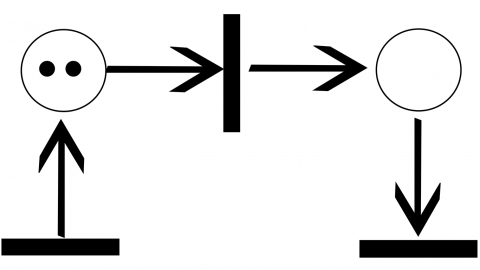 Stefan Haar is a researcher in the Laboratoire méthodes formelles (LMF – Univ. Paris-Saclay, CNRS, ENS Paris-Saclay, CentraleSupélec and Inria), and Deputy Director of Research at the Computer Sciences Graduate School at Université Paris-Saclay. He specialises in formal methods and discrete event dynamic systems in computer science, with a focus on ecological issues.

Stefan Haar studied maths and philosophy at the university in his home town of Hamburg (Germany). As part of his studies, in 1990 he spent a year at Johns Hopkins University in Baltimore (United States). When he returned, he shifted towards stochastic differential equations. He graduated in 1992. After this, “I was impressed by the lectures given by Carl Adam Petri, the inventor of Petri nets, a mathematical model developed to represent various systems that work with discrete variables, so I decided to go into computer science.” The researcher enrolled in a PhD, which he defended in 1997, about the behaviour of Petri nets from a binary relation perspective. This involved analysing the relation between events that take place in concurrent computing processes.

In 1997, Stefan Haar carried out his first postdoc at Humboldt University in Berlin. He then did a second postdoc in 1999 in France, at the Inria in Nancy, then in Paris (at the École normale supérieure), and lastly one in Rennes. In 2001, he was hired as a research fellow as part of the Sigma 2 project, which studied stochastic dynamical systems linked to signal processing and industrial systems. “I worked on recursive algorithms for the supervision of major wireline networks, by modelling erroneous behaviour.” Thanks to this Petri net approach, he was able to reach, with his colleagues, the required level of abstraction needed to model these processes. “By detaching timestamps from erroneous events, this theory made it possible to go from time order to causal order.” The aim was to make diagnoses, to be able to quickly tackle failures due to these accidents, which is a method of automatic control. The latter is the application of control theory to regulate processes without human intervention, which involves comparing a measured value to the desired value and processing the resulting error signal.

In 2007, Stefan Haar took a year-long sabbatical, during which he joined the University of Ottawa. While there, he worked on compliance testing for concurrent system specifications and implementation. He continued this work at Alcatel-Bell Labs’ research laboratory. In 2008, he returned to France and was transferred within the Inria to join the Laboratoire Spécification et Vérification (LSV, then part of ENS Cachan), which, in 2021, merged with the VALS team (Verification and Validation of Algorithms, Languages and Systems) in the Laboratory for Computer Science (LRI – Université Paris-Saclay and CNRS), thus becoming the Laboratoire méthodes formelles (LMF – Univ. Paris-Saclay, CNRS, ENS Paris-Saclay, CentraleSupélec and Inria). Shortly after his arrival, he created the Modelling and exploitation of interaction and concurrency project team, which came into existence in 2010. It was, once again, time to study concurrent systems and multi-components. “I continued my work about asynchronous supervision of distributed computing, which is still my area of research.”

Since 2011, he has been carrying out research into systems biology in partnership with the Institut Curie and the University of Luxembourg to try to understand and predict changes to the complex mechanism of cell reprogramming. “The dynamics of cell regulation are rich and complex and can be modelled using a discrete event dynamic system which has a number of variables. Their objective is to converge towards their attractors.” This means phenotypes towards which cells, which are, by nature, pluripotent, can evolve depending on multiple biochemical reactions that change their genetic orientation. Thus, thanks to the theory of Petri nets, the researcher and his team have developed new techniques, which complement those based on Boolean networks traditionally used by biologists. “We have drawn strong links between these two models; everything that can be expressed in one can be used in the other and vice versa.”

During its journey from one state to another, the cell goes through coordination and transitions that are so complex that the strictly discrete model does not detect them. To address this shortcoming, Stefan Haar and his colleagues have developed a new formal methodology. “This approach, which has been developed using the study on the link between a continuous system and its discrete abstraction is “the most permissive”. This means that it allows as many types of behaviour as possible and makes it possible to predict phenotypes and reprogramming that have managed to escape previous models.”

Stefan Haar's work has also led him, since 2020, to model systems for ecological projects. “Current models that are used to develop simulations are not always accurate because they are often based on differential equation systems. We are developing a new, previously unseen approach.” The aim is to abstract the influencing factors and dynamics at work in certain processes to develop a discrete model over time. For example, the researcher is working, with colleagues from INRAE and Université d’Évry, on a system model that can regulate the survival of termite colonies. By identifying a dozen variables, such as the presence of specific castes (worker, soldier, breeder, etc.), and their possible behaviour or evolution, they can predict if a colony can defend itself against ant attacks and survive. “The major advantage of this model is that it includes different and alternative evolutions. Thus, we can predict if a certain system's state is viable or doomed to fail.”

Stefan Haar became the Deputy Director of Research at the Computer Sciences (ISN) Graduate School (GS) at Université Paris-Saclay in 2020. This GS is backed by teams in 22 research units, which represent 12% of France’s research potential in the field. It brings together 1,000 Master’s students each year and nearly 500 doctoral students, of which more than a quarter are doing their PhD in a company. This structure aims to train future talent, to tackle the major challenges of the digital sector. The GS ISN covers a wide range of subject areas, including programme security and safety, distributed systems, Internet of Things, high-performance computing (HPC), simulations, digital health, computer science for the ecological transition, 6G, big data visualisation and digital twins. The GS is also developing links with the Institut DATAIA, which focuses on artificial intelligence. “IT is unique in that it evolves very quickly, and, in all directions, so new themes appear, and others disappear just as quickly.”