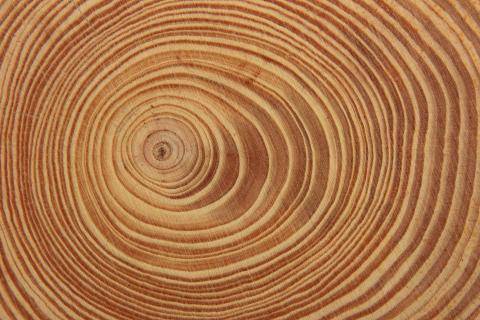 How can we assess the future capacity of forests to capture carbon gas? Jonathan Barichivich from the Laboratory for Sciences of Climate and Environment (LSCE – Univ. Paris-Saclay, CNRS, CEA and UVSQ) would like to use tree ring data and the wealth of information they contain, in order to make existing model simulations more powerful. In order to do this, he was awarded a European Research Council (ERC) Starting Grant in January 2022.

More than a third of the planet’s land surface is covered by forests. The trees and multitude of plants that populate these ecosystems can capture carbon dioxide (CO2), during photosynthesis, a key player in the life of these same species. By working as carbon sinks, these forest ecosystems prevent around eight billion net tonnes of CO2 equivalent from remaining in the Earth’s atmosphere and thus, from contributing to global warming. In order to calculate the storage capacity of these sinks, changes to them over time and involved factors (climate imbalance, deforestation, etc.), scientists have created models to show how terrestrial ecosystems work. One problem remains, however. With current methods, the assessments provided by these giant simulators are very vague and cannot be used to predict the quantities of carbon that forests will store in the future with certainty.

It is because of this that Jonathan Barichivich launched the project called 'Long-term consequences of altered tree growth and physiology in the Earth system' (CATES). This project, which was awarded a €1.5 million ERC grant, will develop a new database over five years based on thousands of tree ring records. The aim of this database will be to enrich it with land surface models, in order to create more specific predictions of the relationship between the climate and the planet’s forest ecosystems.

Tree rings as the cornerstone of the project

Jonathan Barichivich is using tree rings to revolutionise land surface models. These rings appear inside tree trunks and are popularly known for being a sign of tree growth. However, according to Jonathan Barichivich, tree rings also contain other information, such as tree physiology and their ability to store carbon. This is information that the scientific community too often ignores, according to the LSCE researcher. The most common data on tree rings is their width. Dendrochronology is a discipline that studies these widths in order to calculate the age of a specimen. The difference in the size of tree rings also shows disturbances during its growth. By the 16th century, Leonardo da Vinci had already outlined a relationship between the widths of tree rings and climate variability.

“My task within this project is to collect as many tree ring observations from all over the world as I can get, and to take certain measurements myself, such as the chemical composition of the wood. Later, I will need to use the data I’ve collected to carry out simulations with the land surface model,” explains Jonathan Barichivich. “Normally, researchers only measure the width of tree rings they collect. This is only one aspect of the ‘archives’ that these rings could contain. Thus, ring thickness is the most plentiful source of data in the world. But I'm not just studying tree rings; it’s also important to look at the chemical composition and the isotopic study of samples, which provide information about tree physiology, and cell growth of rings, season after season. A good land surface model should reproduce the tree's physiological history,” specifies the climatologist. He estimates that there are now around 5,000 survey sites for tree rings, but only 700 for isotopic data.

There are models that predict the effects of global warming on forest ecosystems. Each land surface model is separated into different (atmospheric, oceanic, terrestrial and cryospheric) components. In a climate simulation, these components interact. For example, changes to the land surface model, such as accurately accounting for forest carbon sink capacity, will influence the atmospheric component. The ORCHIDEE land surface model, which was developed by the Institut Pierre-Simon Laplace (IPSL – Univ. Paris-Saclay, UVSQ, CNRS, CEA, ENS Ulm, CNES, Univ. Paris-Cité, Sorbonne Univ., IRD, Ecole Polytechnique and UPEC), has already made it possible to monitor potential changes to forests. It can only provide limited projections, however.

Tools that are currently used (satellite or ground-based observations) can only provide information over a few decades. By including tree rings, Jonathan Barichivich believes that models such as ORCHIDEE will be able to produce results and predictions over century-long periods. This should help climatologists to better assess the future impacts of global warming. This is because nowadays, the forecasts provided by these models are so uncertain that they sometimes contradict each other. This has implications to the size of climate change simulations. “We currently have data that provide reliable predictions, but only for very short periods such as five, ten or 30 years, maximum. However, we would like to be able to see up to 100 years into the future,” says Jonathan Barichivich. “I argue that the past information contained in tree rings is the key to better century-wide predictions. We call these tree rings “centennial reference points”. However, most tree ring surveys were only conducted for climate reconstructions, not for reconstructions of the ecological responses of forests to global warming. In other words, current land surface models don't look at tree ring information.”

“If tree rings were a book…”

With the CATES project, Jonathan Barichivich is aiming to make land surface models more robust, in order to better determine the role of the world's forest ecosystems as carbon sinks. His sights do not end there, however. “With ORCHIDEE, we’re shifting towards a simulation that will include full tree ring data. If tree rings were a book, up until now, we would have only read the cover. Thanks to this grant, I want to open this book and read whole chapters, whether it’s about the chemistry of rings, their cellular composition, or tree roots (which also have rings!), explains the researcher. I want to identify where plants store carbon. Is it in their stems or in their roots?”

Reading this book has only just started for Jonathan Barichivich. How far will it take him?