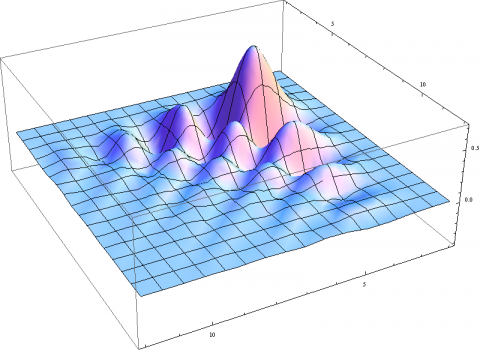 Pierre-Gilles Lemarié-Rieusset is a former student of the École Normale Supérieure, a professor at Université d’Évry, a researcher in the Évry Mathematics and Modelling research unit (LaMME – Univ. Paris-Saclay, CNRS, Univ. d’Évry, ENSIIE and INRAE), and Deputy Director of Research in the Graduate School of Mathematics at Université Paris-Saclay. Although this mathematician is world-renowned for his work on wavelet theory, he is currently interested in Navier-Stokes equations.

Even though maths was an integral part of Pierre-Gilles Lemarié-Rieusset's family background, until his baccalaureate, Ancient Greek was his favourite subject. His love for mathematics came during his 2-year preparatory course for a competitive exam, and then at the ENS, which he joined in 1979. “At the time, among everything I was being taught, it was the only thing I was interested in. At the ENS, I spent most of my free time reading all the old books I could find in the library,” admits the lecturer. After passing his ‘agrégation’ [French national competitive examination], he completed his PhD in pure mathematics about singular integrals. After spending time as an assistant at the School of Science in Tunis, an ‘agrégé répétiteur’ [teaching fellow] at the ENS, and then a qualified professor at the IUT de Cergy-Pontoise, he became an associate professor in 1988 at Université Paris XI. In 1995, he was appointed as a professor at Université d’Évry, where he still teaches. Alongside this, it is in the Évry Maths and Modelling research unit (LaMME – Univ. Paris-Saclay, CNRS, Univ. d’Évry, ENSIIE and INRAE) where he carries out his research.

From the beginning to the explosion of wavelet theory

Pierre-Gilles Lemarié-Rieusset made his first major career change after completing his PhD in 1986, when Yves Meyer, his PhD supervisor, founded wavelet theory, a time-frequency analysis tool. “After he discovered this theory, I decided to devote myself to it alongside him, which led me to co-author the first theoretical article published on this theory, even though my contribution was rather insignificant at the time,” remembers the lecturer. On the other hand, the time he devoted to this theory, which he spent the first ten years of his career working on, was not to be underestimated. “In wavelet theory, the idea is to try to find the characteristics of the signal both in the time variable and in the frequency variable, considering the uncertainty principle which tells us that if we set one, we cannot set the other. Wavelets are, therefore, a sort of mix between time-frequency technical analysis and functional analysis, in that they can be used to characterise a certain number of function spaces that are used for the analysis, all while enriching the powerful algorithm for signal processing,” explains the lecturer. Born in Yves Meyer's office, this theory became known throughout the world during the 1990s and its inventor was awarded the Abel Prize.

Navier-Stokes equations: one of the millennium’s challenges

As wavelets became trendier, Pierre-Gilles Lemarié-Rieusset increasingly felt the need to return to something more fundamental. “This is the advantage of a career as an academic, in that once you’ve moved up a few rungs, you are free to devote yourself to what really interests you,” says Pierre-Gilles Lemarié-Rieusset. When he was appointed as a professor at Université d’Évry in 1995, he decided to take a new direction in his research by devoting himself to Navier-Stokes equations. Since nothing happens by chance, it was through wavelets that he became interested in these equations. “It happens that the structure that makes wavelets work are translational symmetry and scaling. Yet, Navier-Stokes is an equation that is invariant through certain scaling transformations. It was therefore quite logical that I got drawn into it,” he specifies. This new direction seems to have worked for him, as shown by the impressive results he achieved between 1995 and 2000. “It was perhaps beginner’s luck, but it made for strong motivation. Especially since 2000, when Navier-Stokes became one of the seven millennium problems,” adds the lecturer who is still devoting his time to it.

Writing, another way to research

Although his research topics may be difficult for the average person, Pierre-Gilles Lemarié-Rieusset has always been committed to sharing the progress made in his field of research, as can be seen from the many books he has written that have become leading works. His first work, entitled ‘Séries de Fourier et ondelettes’ [Fourier series and wavelets], which he co-authored with Jean-Pierre Kahame and published in 1995, traces the history of two centuries of analysis and explains wavelet theory. In 2002 and 2016, he devoted two other books to Navier-Stokes equations: ‘Recent developments in the Navier-Stokes problem’ and ‘The Navier-Stokes problem in the 21st century’. “In the former, I tried to cover all the functional analysis tools – which students seemed to find useful – and in the latter, to consider all the latest problems. In 2016, I tried to take on a different point of view on the same subject, by not using any of the 2002 tools,” explains the lecturer. In his books, Pierre-Gilles Lemarié-Rieusset avoids focusing on his own research but tries to offer a personal presentation of current research in his field. “When I present the work done by others, I’m happy to read the theorem and find my own mathematical proof. Thus, the writing process is very long but is at the same time, very creative. I learn so much while writing. It’s another way for me to do research.”

If we ask Pierre-Gilles Lemarié-Rieusset what he likes about mathematics, he starts by highlighting “the true freedom to need nothing more than a computer, paper and pencil to work”. It is easy to imagine the mathematician alone at his desk, far from the hustle and bustle of the world…and yet, this would be ignoring Pierre-Gilles Lemarié-Rieusset's commitment to his work, who throughout his career has not shied away from taking on several responsibilities. He was the Director of the Analysis and Probability Laboratory from 2002 to 2013, President of the Academic Council at Université d’Évry from 2017 to 2019 and is now the Deputy Director of Research in the Graduate School of Mathematics at Université Paris-Saclay. A position where, like his career, his only aim is to be of service to mathematics. “It is essential that we provide every research unit, without leaving any of them by the wayside, the conditions to sustain and develop outstanding research. We will thus continue, as we have been doing for years, to be internationally renowned and to attract the best mathematicians in the world to our teams,” he concludes.