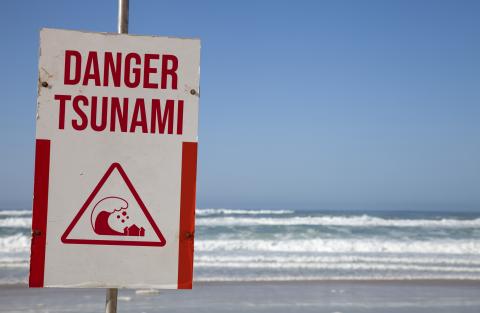 The unstable morphology of many of the planet’s reliefs are cause for massive collapses. When these collapses occur on the shores of lakes or oceans – conditions found especially on volcanic islands, such as La Palma in the Canary Islands, which is currently experiencing the Cumbre Vieja explosion –they can trigger tsunamis. In order to understand the amplitude of waves and risks that coastal populations are exposed to, a team of researchers from the laboratory Fluids, Automatic and Thermal Systems (FAST – Université Paris-Saclay, CNRS), in collaboration with Geosciences Paris-Saclay (GEOPS – Univ. Paris-Saclay, CNRS) and the University of California, Santa Barbara, set an experimental modelling system of these phenomena. It established a scaling law between the height of waves and the volume of material involved, and successfully tested it thanks to a review of historic case studies of tsunamis caused by natural collapse.

Tsunamis are generally triggered by earthquakes, but also landslides, causing sudden spillage of huge amounts of material, such as rocks and earth into the water. This was the case in 2018, when a section of the active Indonesian volcano Anak Krakatau collapsed into the sea. The significant quantity of rocks caused a wave which killed more than 400 people and injured thousands of others. Predicting the characteristics of tsunamis caused by land collapse is therefore a major risk for the safety of local populations.

Philippe Gondret and Yann Bertho work at the FAST laboratory, in the Granular Materials and Suspensions, which specialises in the study of flow of dry and submerged grains and erosion issues. The researchers are trying to model these phenomena, on a small-scale. “Everything started with our colleague Alban Sauret, who had worked on the issue of potentially dangerous collapse of the cliffs of Cap Canaille, near Marseille,” says Philippe Gondret. “He wanted to be able to explore the subject of collapse tsunamis. This is how our collaboration began, at the boundary between mechanical physics and Earth science."

The FAST team developed an experimental system that reproduced wave generation by granular collapse in an interstitial fluid. “Thanks to Alban Sauret expertise and his knowledge of the literature, we quickly had ideas for new experiments to conduct,” recounts Philippe Gondret.

The system is made up of a water tank, at the end of which there is a rectangular column filled with grains, held by a sliding gate. By opening the gate quickly, the grains fall via gravity in the water and trigger a wave whose properties are measured by image processing, using a camera. Another configuration, in which grains fall along an inclined plane, was also tested.

With a tank that is two metres long and some 15 centimetres wide, the FAST system is relatively small when compared to other experiments carried out in channels that can reach up to ten metres in length. “We’re approaching it more as hydrodynamicists rather than hydraulicists,” explains Philippe Gondret. “The advantage of a smaller-sized system is that it’s more agile. We are able to more easily vary parameters and multiply experiments than if we were using a larger and more cumbersome system."

Thanks to the work done by PhD candidates Manon Robbe-Saule and Wladimir Sarlin, the team has carried out several tests using this system to determine how to characterise the height of the wave. “We led experiments with glass beads which reflect the density of soil, sand and gravel pretty well,” says Philippe Gondret. “We also used heavier steel beads or lighter plastic beads, which are closer to the density of snow or ice."

The team highlighted a scaling law linking wave amplitude to the volume of grains that have fallen into the water and the depth of water in the tank. The method used by the researchers, which was initially physics-based and theoretical, provided basic understanding and modelling for more applied research afterwards: proposing a direct comparison with field events.

In search of tsunamis pass: between the literature and field research

Applying this law of scaling to real situations was far from easy. Documenting geophysical events entailed a great deal of research and collection of publications, some of which were old, and information was often incomplete. As Yann Bertho explains: “One of the biggest difficulties regarding real events is that there is never a camera or measurement system in place that captures what happens during the collapse. Events often happen at unpredictable times, and to estimate the height of waves, for example, it requires complex reconstitution work using field reports and witness, when we have them!"

Characterising these historical events also involves measuring the amount of material that has collapsed into the sea or lakes after the event. To measure and observe traces of past tsunamis, researchers formed a collaboration with Anthony Hildenbrand’s team from the GEOPS laboratory, which specialises in large natural collapses. Through surveys of various volcanic islands, they analysed bathymetric data – surveys of underwater relief – in order to identify the collapse deposits and link them with morphological and geological observations on land. “Measurements are not easy to make, because geologists have to try to estimate the amount of material that has collapsed from the debris left under the water,” explains Yann Bertho.

A model that is proving its worth

Lastly, researchers from FAST and GEOPS documented and compared ten historical events with the simulation-based model. The comparison proved satisfactory, with a good level of prediction despite the difference in size and geometry between the two.

However, the FAST team has not yet completed its research, as Philippe Gondret points out: “Until now, for simplicity’s sake, we have carried out our experiments in a narrow channel. We are now considering a system with a less restricted tank and a cylindrical column, in order to observe three-dimensional effects, which could be significant.” Such a system would make it possible to get a little closer to real-life situations and to refine the prediction of these dangerous events.