Claire Thomas-Junius is the Director of the Exercise Biology Laboratory for Performance and Health (LBEPS - Univ. Paris-Saclay, Univ d’Évry and IRBA) and Deputy Director of Research in the Graduate School of Sport, Movement and Human Factors at Université Paris-Saclay. She is passionate about sports and physiology, and devotes her work to better understanding the physiological mechanisms to personalise sports coaching and improve health through exercise.

Claire Thomas-Junius is a former middle-distance runner. It was only natural that she became interested in sports physiology and began studying biology at Université Paris-Diderot in 1996. She then undertook a DEA (master’s degree) in human motor skills and disability at Jean Monnet University Saint-Étienne, which she followed with a PhD in exercise physiology at University of Montpellier. She defended her PhD in 2004, which was about energy metabolism, i.e., the energy production mechanism of muscle fibres. “It’s still my area of research, which goes from male and female physiology to cellular and molecular adaptations in response to high-intensity exercise.”

In 2005, Claire Thomas-Junius joined Université d’Évry as a lecturer. Her work focused on better understanding the metabolic response to different high-intensity sports, with the aim of better coaching athletes, and improving their performance. She was interested in sports that need constant effort or those with intervals from around 30 seconds to seven minutes, such as long sprints (400 m and 800 m), boxing and track cycling. “As the duration of effort for these sports is very short, the muscle transforms glucose into pyruvate using the sugar degradation pathway called glycolysis.” Pyruvate is then converted into lactate, which is more commonly known as lactic acid, or is used by the oxidative pathway (which consumes oxygen). Additionally, contrary to common knowledge, lactate is not poisonous to muscles. It is quite the opposite; it directly provides muscles with a significant energy substrate. “When lactate is produced in high quantities, the athlete quickly receives energy and can improve their performance.” What is more, the latest research shows that the metabolite activates muscular adaptations by stimulating gene expression, both on a metabolic and contractile level.

From lactate to metabolic acidosis

However, lactate production is concomitant with a disruption in the acid-base balance in the organism. For around 20 years, the lecturer has been studying the effects of metabolic acidosis on mitochondrial function with colleagues from France’s National Institute of Sport, Expertise, and Performance (INSEP), University of Montpellier and Victoria University (Melbourne). This means on the intracellular organelles which store elements that are essential to cell function. These scientists also want to identify the role of this acidosis in ion and energy substrate exchanges in the muscle membrane. “With too high a dose, metabolic acidosis could inhibit biological reactions in the organism, hinder muscle function, cause fatigue and slow down adaptations between two coaching sessions. We are looking for ways to find a balance to overcome these problems.”

In 2016, rugby became an Olympic sport. “It was an amazing opportunity to work with the French Rugby Federation and the National Rugby Centre in Marcoussis, and to put our skills to good use to provide more information to coaches and fitness trainers before the Olympic Games.” With her colleagues, the researcher quantified different speeds, intensities, and accelerations during an international tournament, and observed the lactic metabolism responses and acid-base balance in each player. They were able to conclude that there are several types of player profiles. “For example, some can reach very high speed, and others can sustain a level of endurance throughout the game, which requires tailored coaching.”

Building on this knowledge, from 2017 to 2019, Claire Thomas-Junius was seconded to the INSEP. She worked with the French Rowing Federation and University of Clermont Auvergne to understand and compare energy metabolic responses in adolescents, depending on their pubertal timing stage. “Girls develop faster than boys, they have more body fat and have a different endocrine profile.” With her colleagues, she is currently working to understand the energy and muscular responses in women with the French women’s rugby sevens team, the Olympic vice-champion in the 2021 Tokyo Summer Olympics. “All the studies were about men, it was about time that someone takes an interest in women!”

In January 2020, Claire Thomas-Junius took on the leadership of the LBEPS that she created with her colleagues in the STAPS (sciences and techniques of physical and sports activities) department at Université d’Évry, the IRBA (Armed Forces Biomedical Research Institute) and the CERITD (Centre for the Study and Research on Intensification of Diabetes Treatment). The lecturer and her team have outlined the direction for the next five years around three axes. The first axis, called ‘Homme entraîné’ (Coached Mankind), aims to optimise performance by studying the impact of sporting actions and different strategies (nutrition, sleep, etc.) on metabolic responses and the neuroendocrine system. This research is being carried out in partnership with the French Athletics Federation and the French Rugby Federation in preparation for the 2024 Paris Olympic Games, “but we would like for it to be of use for all sportspeople, and the public in general.” The second axis, ‘Homme fatigué’ (Tired Mankind), is about exercise in extreme conditions like heat, intense cold, and hypoxia (low oxygen in altitude). By studying genetic polymorphism, variability in cardiac frequency, and even biomarkers in soldiers and sportspeople, it can become possible to predict exercise-induced heatstroke. The third axis, ‘Homme pathologique’ (Pathological Mankind), aims to develop non-medication treatments thanks to exercise, for some types of metabolic diseases, such as diabetes and neuromuscular disorders.

Deputy Director of Research in the Graduate School of Sport, Movement & Human Factors

In 2021, Claire Thomas-Junius became the Deputy Director of Research in the Graduate School of Sport, Movement & Human Factors (GS SMFH), which brings together seven research units that work on complementary themes, such as life science, ergonomics, human and social science and information science. A lot of its research is innovative and interdisciplinary. “We aim to develop joint research strategies around sport, movement and engineering science, by fostering collaborative work and bringing an international dimension to the GS SMFH.” The GS programme, which was updated last year, now includes five master's degrees, two of which are in English and are directly related to the LBEPS’ research themes: Sport Sciences for Health and Performance and Physical Activity Exercise and Health, which welcomes both French and international students. 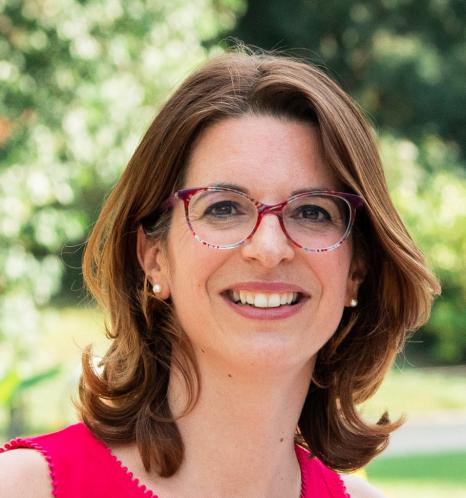