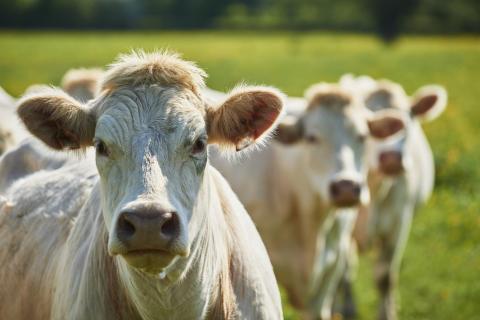 Beef has not had the last word

It’s a major producer of greenhouse gases, it’s bad for your health, it’s animal cruelty… Red meat is on trial. With the end of COP26, certain experts recommend limiting the production of red meat, favouring rather, more eco-friendly alternatives such as chicken, pork and vegetable substitutes. To implement this idea, there is an initiative that is growing in popularity with public decision takers: increasing taxes on the foods that are the largest producers of carbon. The work by French and British researchers, some of which are from the laboratory Sciences for the Action and Development – Activities, Products, Territories (SADAPT – Université Paris-Saclay, INRAE, AgroParisTech) nevertheless alerts the public to the fact that taxing red meat is not necessarily the best solution.

Agriculture represents 19% of greenhouse gas emissions (GHG) in France, among which, 45% of gas emissions are methane. Livestock farming, which produces 68% of all emitted gas, is a lever for action that is to be prioritised in the fight against climate change. To evaluate the environmental impact of a certain cultivation, the most used criterion is that of its carbon footprint, i.e., the CO2 equivalent of GHGs emitted per quantity of food produced. Ruminants, a considerable source of emitted methane, which takes the form of eructation, are the main losers here. Micro-organisms in their digestive tract produce significant quantities of gas as they digest plants. In comparison, chicken, pork and vegetable proteins have a much smaller carbon footprint. Does that mean we should give up beef? The team of researchers from the SADAPT laboratory and their colleagues are not so sure of this. They believe that sustainable development must also consider criteria other than GHG emissions, such as soil use, economic benefits, the nutritional value of food and even farming practices.

The nutritional value of food

Ruminant GHG production has reached consensus in the scientific community. Without completely calling it into question, the French and British team of researchers has nevertheless expressed reservations about the tools used to evaluate the situation, in that they do not necessarily consider all relevant parameters. Rather than basing analysis solely on meat mass that is produced per unit of surface, Joao Pedro Domingues from the SADAPT laboratory, and his colleagues, have also considered the nutritional value of this meat by giving it a nutritional score. This score promotes beneficial nutrients for human health, such as protein, omega-3s, iron, vitamins and minerals. The world needs feeding, and it is necessary to provide it with excellent quality food. This method questions the accusations made against beef. By basing analysis on the CO2 equivalent emitted per kilogram of produced meat, beef has a carbon footprint that is four times higher than chicken. This figure, however, decreases if we consider the nutritional value of this meat.

A second point considered by researchers is how arable land is divided. While poor quality soil serves only as pastureland or to produce fodder for livestock, arable land is subject to competition between cultivation of plants for human and animal consumption, including soy, corn and cereals that are part of the food intake of livestock farming. Yet this land has been reducing in size for many decades now because of urbanisation, desertification and global warming. This is especially the case for fertile land in favourable climates. In this case, how should agriculture land be divided? One lead comes from the Netherlands. A study from Wageningen University has shown that for optimal use of agrarian land, animals should produce 12% of consumed protein. This proportion allows by-products, which cannot be used for human consumption (fodder, agri-food waste), to be recycled, without encroaching on too much agriculture space.

Ruminant farming also results in less pressure on cultivable land than pigs or chickens, and in particular, regarding non-intensive farming. Indeed, ruminants eat less cereal or soy than other animals, favouring grass and fodder. When the nutritional score is considered, the cultivation split of arable land becomes even more striking. To produce the same quantity of nutrients, just under 2.5 acres of land are needed for ruminants, compared to over 7 acres for pigs and over 12 acres for chickens.

The statistical study, led by Joao Pedro Domingues, also shows that in France, the regions with the most ruminants also have the highest nutritional potential per square metre of land.

Are we moving towards a carbon tax on meat?

Livestock farming is, however, a major use of water and resources. In the coming years, meat consumption on a global scale will have to evolve, in line with sustainable development. To speed up this transition, some scientists have suggested creating a tax on meat. By taking on an economic factor, they would like to raise ecological awareness. This initiative is quite popular with public decision takers. In 2020, the UK Health Alliance on Climate Change, an organisation that brings together health professional representatives, called for the creation of a tax on red meat in the United Kingdom. In September 2021, the European Parliament also looked into increasing VAT on food products that have the greatest climate impact.

In France, according to estimations made by researchers at Oxford, red meat should be taxed 19% and dairy products should be taxed 11%. When modelling this scenario, Joao Pedro Domingues and his colleagues showed that meat and dairy production would drastically reduce. The production of GHG would fall by about million equivalent tonnes of CO2, but some livestock farmland would have to be used as cropland, and farmers would have to change careers, sometimes leaving the agriculture industry. On a national level, this would be reflected with an economic loss of 232 million dollars. According to researchers, this would cancel out the advantages of reducing GHGs.

Ruminants have a socio-economic benefit and help in adding value to prairies and pastureland. The solution to balancing excess consumption of red meat and completely abandoning it has yet to be found. “We need to find a happy medium that will cater to human nutrition, rural economies and fighting climate change,” noted the French and British team of researchers. Their multi-dimensional analysis tempers criticism against ruminants and encourages the pursuit of different approaches to identify the best sustainable initiatives. It also shows that beef is still very much rooted in French agriculture practices. Bovine races are sure to be the stars of the Paris Salon de l’Agriculture for years to come.