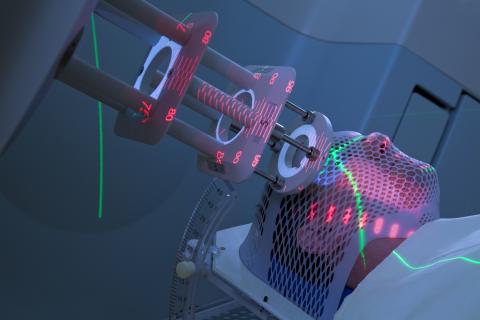 TheraPanacea: using artificial intelligence to improve the quality and access to cancer treatment and beyond

The start-up TheraPanacea is the result of over fifteen years of research at CentraleSupélec and Inria Saclay in partnership with the Institut Gustave Roussy. Using a solution for optimising oncology care, its aim is to push back the limits of radiotherapy.

TheraPanacea was created in 2017 and uses mathematics, physics, artificial intelligence and treatment data to develop a software suite for analysing medical data (mainly from imaging) in order to standardise, facilitate and optimise the implementation of oncological treatments as part of a therapeutic process. It is a product made up of several functional building blocks, two of which are already certified and marketed in Europe and the United States. They are based on algorithms which standardise the protocols for treatment decisions and the implementation and monitoring of patients’ treatments, thereby improving the quality of, and access to, the latest care. This approach has already made it possible to treat one in five patients in France in 2021, which amounts to 40,000 individuals in around 50 public or private hospitals. “Our solution offers patients the chance to receive the best treatment possible from amongst those available today, whether they go to a large hospital or a small provincial centre,” says Nikos Paragios, the start-up’s founder and director. This senior fellow in applied mathematics at CentraleSupélec is also the founder and former director of the Centre for Digital Vision (CVN – Univ. Paris-Saclay, CentraleSupélec) and the Galen project team at Inria Saclay. Its three main research areas are medical imaging, statistical learning (or artificial intelligence) and computer vision - which involves interpreting data from cameras and camera systems.

The origin of the success story

In 2014, following the diagnosis of several cases of cancer in his family, Nikos Paragios became interested in the different treatments available on the market. He realised that radiotherapy, which was used in 60% of cases, could still be further improved. “I thought that mathematics could change this situation and that the standardisation or automation of care could add a lot of value to the field of oncology.” That same year, his laboratory received a grant from the Fondation Digiteo to conduct market research and test the commercial potential of their idea. In 2015, he began discussions with SATT Paris-Saclay which provided him with funding to speed up the development of the project. This started in 2016.

The start-up grew very rapidly thanks to several public grants, a fund-raising campaign and participation in several competitions, such as the Ministry of Higher Education, Research and Innovation’s I-LAB 2016 competition and a digital innovation competition held by the Banque publique d’investissement (BPI) in 2017. In 2018, the company raised €3.5 million from Therinvest. In 2019, it also received 2.5 million in funding from the highly selective European programme Horizon 2020 SME Phase II Instrument. The novel and innovative nature of its technology also earned it several prizes, including the 2017 Innovation Prize of the City of Paris , the AI Challenge Paris Region prize in 2018, and the start-up prize EDF Pulse in 2019.

ART-Plan was the start-up’s first product and has been certified and marketed since 2019. It provides the potential to improve the radiation plan and reduce the toxicity of radiotherapy treatments. Although the radiation used today targets cancer cells precisely in order to eliminate them, it also destroys everything in its path, including sometimes healthy organs, which are known as organs at risk. By making a digital model of the type and shape of the tumour to be treated (i.e. a 3D digital twin), it is possible to optimise the management of radiation and avoid nearby organs. “For example, in the case of a brain tumour, the optic nerve must not be touched, otherwise it may result in blindness.” This method gives hospitals the ability to speed up patient care and reduce delays, amongst other things. The Gustave Roussy and Léon Bérard Oncology Centres have seen proof of this. Thanks to this solution, the former has set up a new breast cancer treatment protocol in one week and the latter has reduced the time between the first image capture and treatment from two to four weeks to one week. The product also alleviates the staff shortages many hospitals are facing when it comes to reviewing test results by automating this step. “The reduction in time to prepare the treatment plan can be as high as 95%.”

The second building block in TheraPanacea’s software (which has been certified and available since 2021) concerns changes in the patient’s body which is reproduced using the data acquired through imaging. This is collected at each stage of the treatment. Thanks to this long-term study, doctors can easily observe any inflammation of organs and their alteration in shape, as well as cases where the body does not respond to the prescribed treatment. They can then quickly modify the treatments. “Treating cancer involves reacting very quickly to changes. Making the wrong choice of approach, or too late, can be fatal. The best decision should therefore be made as soon as possible.”

The third of the start-up’s products, which is currently being certified and should be ready in the summer of 2022, is unique in the field of cancer care. It involves carrying out radiotherapy guided by MRI and not by a scanner, as is the case today. This reduces the toxicity of X-rays on the body and provides, in addition to anatomical information, functional information on the behaviour of the tumour. This is never uniform as it has areas which are more aggressive than others. “The use of multiparametric imaging will allow the dose delivered to be controlled locally. Combined with our aim to monitor and adjust care through planning, this will be a major contribution to the better treatment of patients by reducing side effects. All the hospitals we are in contact with are already showing an interest in this new application component.”

A solution for neurodegenerative diseases

TheraPanacea is still continuing to diversify. In December 2021, it approached the pharmaceutical group Biogen. A €50 million investment means that the partnership can aim to develop personalised therapeutic solutions for all types of neurodegenerative diseases (multiple sclerosis, Alzheimer's and Parkinson's disease). It involves collecting data from clinical trials conducted with different molecules and matching this data with patient phenotypes in order to determine the most appropriate therapies for each patient. “Our task is to analyse the data and identify the molecules which cause positive responses in patients in order to offer them the best therapy.” The start-up is also in discussion with other large pharmaceutical groups to develop this type of solution in the field of oncology.

A start-up full of ambition

The start-up, which has been based until February 2022 at the medtech incubator Paris Santé Cochin, today has 60 employees shared across four sites (Paris, Lyon, Montpelier and Athens), more than half of which are engineers in software development, statistical learning and the physical sciences. It plans to double its workforce within 18 months and enter 5% of the world's most innovative cancer clinical sites by 2025. “We imagine a world where, thanks to our algorithms, every patient will be guaranteed access to the best care available from amongst all the existing treatments.”