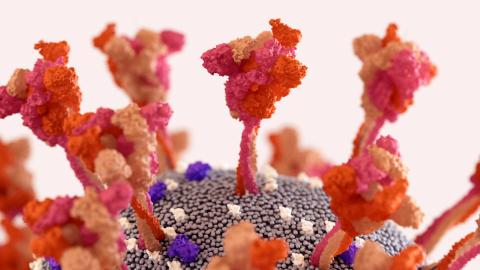 A mathematician at the IHES has identified the evolutionary characterization of the tip of the SARS-Cov-2 spike protein using geometry. This discovery could be used to identify areas of the protein most likely to change through the mutation of the viral genome and help in the development of vaccines which could be effective against new variants of the Covid-19 virus.

The SARS-CoV-2 variants responsible for the current Covid-19 pandemic emerged as mutations which occurred in the RNA genome of the virus and changed its protein structure. It is changes in a specific protein in the variants of concern (Beta, Delta, Omicron, etc.) which gives them a selective advantage. This is the spike (S) protein.  The spike protein comprises two parts: a tip which allows the virus to attach itself to the cell to be infected, and a stem which helps it to penetrate the cell.

Robert Penner, a mathematician at the ‘Institut des hautes études scientifiques’ (IHES) and a specialist in combinatorial geometry, studies the folding in space of one-dimensional objects. He has recently been working on the 3D structure of the spike protein and has been using a data bank which catalogues the structure of this protein in the different variants of SARS-CoV-2. These have been obtained using cryo-electron microsophy. “I began by being interested in string theory, then I moved on to biology and the study of the peptide backbone of proteins. Geometric problems are the same everywhere, to within a few orders of magnitude,” explains the researcher.

While protein maintains a stable form overall, it is also capable of adapting its shape according to the different tasks it has to perform. The researcher explains: “Before the beginning of the pandemic, I was working on viral glycoproteins, which are comparable to the spike protein on other viruses. These proteins are fascinating. They have the ability to completely reorganise themselves (much like the robots in the Transformers films) so that they can link and fuse with the target cell. It is a mesmerizing phenomenon which lends itself very well to a geometric approach."

Like all proteins, the spike protein comprises a chain of basic building blocks (the amino acids) which are linked together by peptide bonds. This chain folds in on itself to form a three-dimensional structure, much like a crumpled ball of paper. Amino acids which are far apart in the base sequence then find themselves close to each other and form another type of bond: a hydrogen (H) bond. As around 70% to 80% of amino acids in the peptide backbone are involved in this phenomenon, it stabilises the overall structure of the protein.

Robert Penner’s work, which advocates the concept of ‘backbone free energy’, is based on the geometric observation of H-bonds present in the spike protein. As a result of analysing the structure of this protein in different variants of the virus, the researcher has calculated a free energy value for each amino acid involved in one or more of the H-bonds. The more the H-bonds strengthen the position of the amino acid, the less the amino acid will be able to rotate in space and the lower its free energy will be. “In contrast, the places where free energy is the highest are those where significant conformational changes can be expected,” reveals Robert Penner. The mathematician then compared this data with data on mutations identified in the variants of concern of the virus.

H-bonds hinder the introduction of mutations

The majority of amino acids modified by mutation of the viral RNA in the spike protein are located at the protein’s tip. Robert Penner has shown that they are generally not involved in an H-bond. However, amino acids which are modified in the stem are more often involved in these bonds.

Changes in the tip of the S protein are to be expected because a virus-friendly mutation should neither increase the free energy of an amino acid to the point of destabilising the protein, nor decrease it to the point of disrupting its reconfiguration. Since the amino acids that are not involved in H-bonds have no free energy, their modifications will not cause changes in the protein’s 3D structure and this mutation has more of a chance of being conserved. Robert Penner thinks this is a protective process for key amino acids. They avoid any mutation because they are stabilized by the H-bonds. “This theory about mutations being regulated by hydrogen bonds requires more research,” the researcher admits.

The picture observed for the protein stem is more counter-intuitive. This can be explained by the basic structure which does not provide all the information needed to understand the phenomenon. In databases, the appearance of the protein precedes its entry into the cell. “The tip of the spike is active on the exterior of the cell being infected, where the surrounding pH is 7. This allows the virus to bind to the target cell. However, the protein's stem only becomes active once it is inside the cell. Separated from the end which held it in steric hindrance, the stem is then exposed to an acidic pH. These two phenomena change its geometry and ensure that it plays its role in the infection. It all happens in a flash. However, for experimental reasons, databases only have the protein configuration at pH 7 and we don’t have a good picture of hydrogen bonds in the stem,” explains Robert Penner.

New vaccines: anticipating the next variants

The study of H-bonds in variants of SARS-CoV-2 suggest that Omicron came from mutations of the Delta variant and not of the original strain which appeared in Wuhan. There is much evidence to support this theory, including the fact that Omicron appeared in South Africa when Delta was predominant. Robert Penner’s work will therefore help in the development of effective vaccines against future variants. “Strategies could be developed to predict which amino acids are likely to be modified through mutation and which are not part of hydrogen bonds by looking at the tip of the spike protein on the currently predominant variant (Omicron),” suggests the researcher.