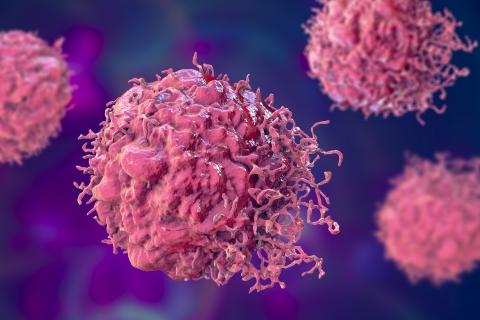 The possibility of regulating the synthesis of certain proteins by tackling messenger RNA (mRNA) translation initiation has given researchers the chance to develop new treatments that can fight cancer treatment resistance. This research, which was developed at Université Paris-Saclay, is the purpose behind Ribonexus, a start-up created by the Institut Curie and Institut Gustave Roussy last November.

Today, there are two cancer treatments that significantly increase life expectancy for patients: immunotherapy and targeted therapy, both of which were put on the market in 2011, and improved in 2014. The former indirectly attacks tumor cells by helping the immune system to recognise and destroy them. The latter blocks the tumor’s growth or spread by directly tackling biological signal pathways, which are the communication and interaction systems that control fundamental processes in cells. In this case, this means blocking the two BRAF (proto-oncogene B-Raf) and MEK (kinase) proteins located in the signal pathway that is activated by a mutation of the BRAF oncogene. Although these treatments are powerful, their effectiveness is very often limited over time. The majority of patients relapse due to treatment resistance. However, despite several clinical trials and research that is underway regarding the development of new treatments, as of yet, no new treatment seems to be as effective as these two strategies.

Caroline Robert, a researcher in dermatological oncology in the Molecular Predictors and New Targets in Oncology research unit (PMNCO – Univ. Paris-Saclay, Institut Gustave Roussy and Inserm) did not want to stop at this roadblock. In 2011, alongside Stephan Vagner, a specialist in the biology of mRNA and their mechanisms, and director of the Genome Integrity, RNA and Cancer research unit (GIRC – Univ. Paris-Saclay, CNRS, Institut Curie and Inserm), they decided to bring the translational research team together to study biomarkers and resistance in tumour samples. Together, they put forward a hypothesis: the process that controls the creation of proteins using mRNA could play an important role in anti-tumor treatment resistance. “This biological parameter has not been explored in-depth in the therapeutics field. We were the first to do so,” explains Caroline Robert.

Discovery of the eIF4F complex

mRNAs are copies of DNA, which is genetic information material stored in a cell’s nucleus. Once transcribed, mRNA moves into cell cytoplasm to be translated into proteins, which are molecules that are vital to correct cell function. Protein synthesis initiation is controlled by the eIF4F complex (eukaryotic initiation factor 4F). It is located downstream of many cancer signalling pathways, including BRAF and MEK oncogenes.

In 2014, these researchers proved that resistance to anti-BRAF targeted therapy is related to persistent activation of the eIF4F complex and that it can be reduced by scaling down the activity of the latter. “Our hypothesis was proven right on in vitro and rodent testing, in which we also found biomarkers that show that the eIF4F complex had been activated. We, therefore, published a proof-of-principle,” explains Stephan Vagner.

To transfer this principle to human beings and make more than ten years of research and expertise of two research units a reality, they developed their research via the creation, in July 2021, of a start-up, thanks to incubator programmes and support from the Institut Curie and the Institut Gustave Roussy. Bringing together translational and fundamental research, its launch was made possible after raising €4 million in funds with AdBio partners, Crédit Mutuel Innovation and Pierre Fabre. Although it was originally called Aglaia Therapeutics, it was renamed Ribonexus in November 2021. In February 2022, it received €1.5 million in funding from the BPI. Caroline Robert, Stephan Vagner and Laurent Desaubry, a chemist at Université de Strasbourg, are its co-founders and scientific advisors. Ribonexus aims to develop new treatments that can fight targeted therapy resistance in patients with cancer.

In order to do this, the Ribonexus team is looking for the best way to inhibit the eIF4F translation initiation factor. During in vitro and in vivo testing, they experimented with a natural molecule that comes from the Malaysian species of the Aglaia, the Silvestrol. This molecule, which was used for the proof of concept, cannot be used clinically, because it is subject to resistance (it is rapidly ejected outside cells). The researchers used therefore a new series of candidate molecules that targeted the eIF4F complex provided by Pierre Fabre’s laboratory, after a licence agreement was signed in November 2021 for co-development purposes. “With the Ribonexus team, we hope to identify one or two candidate molecules within two years, in order to begin the first phase 1 clinical trial. They need to go through a series of cell testing on mice, such as toxicity, pharmacokinetics and pharmacodynamics testing,” explains Stephan Vagner.

Once the molecule has been chosen, another challenge awaits the team: finding the right treatment dose, method and frequency. This is because there is little information available to understand the dynamics of cancer cell growth and their behaviour compared to host cells. For Caroline Robert, “their strategy is complex because not all mRNAs are controlled in the same way by the eIF4F complex”. However, Stephan Vagner adds: “Translation of mRNAs that are most dependent on the eIF4F complex will be the most inhibited by drug candidates targeting this complex. They are at the origin of protein synthesis involved in the tumour process and are at the heart of the resistance mechanism to treatments." This ambitious research will make it possible for Ribonexus to develop effective therapy with limited toxicity.