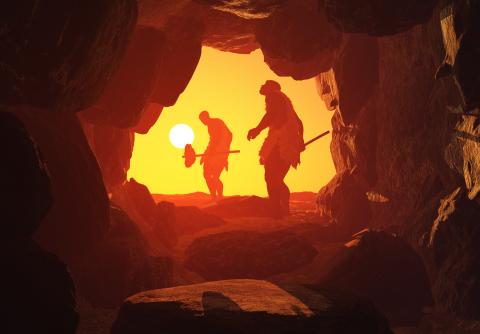 The Rhône valley: Home to Neanderthals for over 200,000 years

New dating of archaeological remains uncovered in over ten caves and rock shelters in the Rhône valley has made it possible to establish the periods of Neanderthal occupation in this region during the Palaeolithic age. It has revealed that Neanderthals used this area continuously for hundreds of thousands of years.

The Rhône valley is an area in France which has a significant wealth of archaeological sites, with caves housing hominid remains in particular. A multidisciplinary team of researchers led by the National Museum of Natural History (Paris), including members from the GEOTRAC team from the Laboratory for Sciences of Climate and Environment (LSCE – Univ. Paris-Saclay, CNRS, CEA, UVSQ), has recently been studying the role these shelters played in the Middle Palaeolithic era. France was occupied solely by Neanderthals during this period dating from  300,000 to  40,000 years ago - a period characterised by the knapping of stone.

In order to establish the period of occupation of each cave and rock shelter, the team carried out a major analytical study. This work required a variety of specialists and a wide range of disciplines, including archaeologists who excavated and analysed the soil of each cave to a depth of several metres, as well as geologists, chemists and physicists. The team brought together all the studies carried out over the past twenty years and new dating was carried out to fill in the chronological gaps.

As the oldest remains were located in the deepest layers of soil, it was necessary to choose the most appropriate dating method to determine the age of the samples. Carbon-14 dating is the most familiar but can only be used on organic samples up to about 50,000 years ago. Scientists used three other techniques based on natural radioactivity to get around this problem.

The first step was a field trip to collect samples and measure the current radioactivity of the site. “I’ve been working in the caves in Ardèche since my Master’s,” reveals Maïlys Richard, a researcher from the LSCE. “I have a background in archaeology and enjoy taking part in excavations. Sometimes I spend several weeks there. This is important to understand the layout of the cave and to assess the quality of the samples taken.” Physical and chemical analysis of the samples can then take several weeks to several months back in the laboratory.

Stalactites, tooth enamel, sediment... Everything is useful when establishing a date

The first dating method used by scientists during the study was uranium-thorium dating. It is based on the radioactive decay of certain isotopes in the chemical elements and utilises their presence in calcium carbonate minerals. In this particular case, uranium is incorporated into speleothems (stalactites, stalagmites, floors, etc.) during their crystallisation and in the bones and teeth of skeletons as they become buried in the caves. The uranium (238U and 234U) decays over time into thorium (230Th) at a known regular rate. By measuring the levels of uranium and thorium in a sample, scientists are able to calculate its age.

The radioactive decay is also accompanied by a release of radiation which ionises atoms, releasing electrons which become trapped in the crystalline structures of quartz, feldspar, bone and tooth enamel. These electron traps fill up according to the surrounding radioactivity and the time elapsed. A single tooth is therefore enough to know the age of a skeleton by stimulating the hydroxyapatite in tooth enamel using magnetic resonance spectroscopy and estimating the amount of electrons which have been trapped there. If a study needs to be made of a cave’s sedimentary layers, luminescence dating can be used to date feldspar, a mineral that is very abundant in the soil. When it is stimulated using infrared radiation, feldspar emits blue light which is more or less intense depending on its age.

These three techniques have been in use for several decades and are continually being improved. “Analysis is becoming increasingly delicate and precise. Today, just a few milligrams are enough to date a sample, which in turn preserves the caves,” explains Edwige Pons-Branchu, a researcher at the LSCE. “Using the uranium-thorium method today, we can go back 500,000 years with samples no bigger than a finger."

“The most significant discovery from our work is showing that Neanderthals lived continuously in the Rhône valley throughout the Middle Palaeolithic era, from 300,000 to 40,000 years ago,” points out Maïlys Richard. Edwige Pons-Branchu adds: “There were some key changes in climate, yet occupation in the region remained continuous, even during the ice age.” The Neanderthal men and women knew how to adapt to the cold and to fluctuations in the animals they hunted and plant species

However, this doesn’t mean that every cave was continuously inhabited throughout this period. Some became uninhabitable after the collapse of a roof or an entrance, or were simply abandoned by the Neanderthals, meaning other inhabitants moved in such as bears, the bones of which have also been uncovered.

Today’s knowledge suggests that most of the caves and shelters were occupied on a seasonal basis by the Neanderthals as they followed the migration patterns of their quarry. The Neanderthals used the smallest caves as temporary places and stayed the longest in the largest caves and shelters. In particular, they could set up stone-knapping workshops there. Archaeologists have also discovered different stone-knapping techniques in the Rhône valley which illustrate the Neanderthals range of skills.

The timeline established by researchers from the LSCE has now been added to the archaeological data. Previous studies have shown that the knapped tools found in the cave in Orgnac were created using the Levallois technique and date back more than 300,000 years, making them one of the oldest known examples. Scientists have highlighted a higher density of occupation at the end of the Middle Paleolithic era in Ardèche, between approximately 125,000 and 40,000 years ago. Although stone-knapping techniques (the Levallois method and discoid method) are common to several sites, they were used in varying degrees. The Neanderthals probably adapted their tools to suit their particular local needs.

Another important element of the study is that the most recent remains attributed to Neanderthals suggest a potential cohabitation with modern humans in the Rhône Valley. “We have found traces of Neanderthals dating back about 40,000 years. The first remains attributed to Homo sapiens in the region were the paintings in the Chauvet cave 36,000 years ago. Taking into account the margin of uncertainty in our dating, which may be a few thousand years, it’s possible that Neanderthals and modern humans lived in the Rhône valley at the same time, or during periods very close to each other,” explain the researchers from the LSCE.

Over the next few years, Maïlys Richard and her colleagues intend to continue their study of the caves in Ardèche. “It’s a key region where there’s still a lot to discover. It’s full of information about the arrival of Neanderthals in the region 300,000 years ago as well as up to more recent inhabitants when Homo sapiens arrived in Europe,” she concludes.