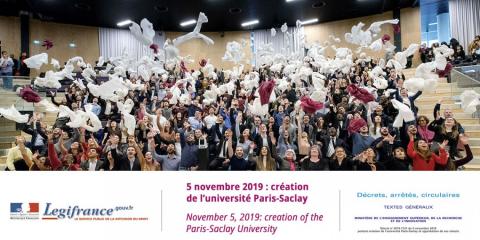 The creation of the new Paris-Saclay University was made official by decree today, and will enter into force on January 1, 2020. The decree starts a period of up to four months during which a provisional administration will organise the elections of the university Board and set up the governing bodies.

It's done! The new Paris-Saclay University was officially created this morning following the publication of the decree of creation in France’s Journal officiel.

As of 1st January 2020, Paris-Saclay University replaces Paris-XI University and the community of universities and institutions "Université Paris-Saclay", and integrates, as component-institutions which retain their legal personality, under the conditions specified in its statutes, the Paris Institute of Technology for Life, Food and Environmental Sciences (AgroParisTech), “CentraleSupélec”, the “Ecole normale supérieure Paris-Saclay” and the “Institut d'Optique Graduate School”. It also integrates the Institut des hautes études scientifiques, a recognised non-profit research organisation.

It includes the Universities of Versailles Saint-Quentin-en-Yvelines and Evry-Val-d'Essonne as member-associated universities by convention. These participate in its governance within the perspective of a merger.

CEA, CNRS, INRA, Inria, Inserm and ONERA confirm their strengthened partnership with the new university. The scientific perimeter integrates the laboratories of the national research organisations located within the perimeter of Paris-Saclay University, listed by convention. The national research organisations are involved in the governance of the university.

The new university is established on the basis of the Order No. 2018-1131 of 12 December, 2018. With a commitment to integration expressed in its acts and statutes, the Paris-Saclay University wishes to become a university with solid international influence while being rooted in its territory. It is profoundly transforming the landscape of French higher education and research by intensifying a policy of training, research and innovation open to the world.

Decree No. 2019-1131 of 5 November 2019, establishing Paris-Saclay University and approving of its statutes.

To face the challenge of international competition in education, research and innovation, 13 of the most prestigious institutions in France form Université Paris-Saclay and combine their programmes and research in order to compete at the highest international level.

Université Paris-Saclay offers a wide range of education programmes, from bachelor’s degrees to doctorates in fields involving natural sciences, social sciences and the humanities. There are currently 65,000 students in the founding and associate institutions, including 9,000 master’s students, 4,600 doctoral candidates.