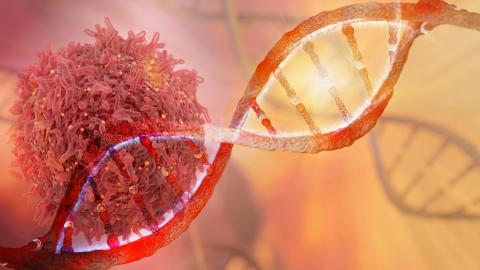 Thanks to the discovery of unprecedented technology, the PTPs-VAC project’s future start-up will be able to develop a peptide vaccine to fight cancer. Elikya Therapeutics is focusing on new treatments in the immune-oncology field.

The PTPs-VAC project (early translation products – vaccination) aims to identify antigen peptides which can be used to develop an anti-cancer peptide vaccine candidate. It is led by Sébastien Apcher, a researcher in the Immunology of tumours and cancer immunotherapy research unit (ITIC – Univ. Paris-Saclay, Gustave Roussy and Inserm). With the SATT’s support since 2018, it has been able to identify neoepitopes (antigens). These are peptides that have between eight and fifteen amino acids and that cause an immune response. Since tumours do not create enough of them naturally, this causes them to produce more. With this, the immune system recognises them as foreign bodies that need to be destroyed.

The technique used to stimulate the production of these peptides is based on the work done by Sébastien Apcher and his team in 2014. They discovered that the spliceosome, a protein complex that is in the nucleus of nucleated cells, is essential to splicing RNA. In other words, it is the RNA processing mechanism that allows it to remove non-coding sequences (introns) to produce a messenger RNA that translates functional proteins. “We showed that by inhibiting the spliceosome, it is possible to keep unprocessed RNA in the cell for longer and thus to encourage the production of neoepitopes using these RNAs,” notes Sébastien Apcher.

In 2016, as part of his project, Sébastien Apcher, who wanted to test a spliceosome inhibitor molecule on processed molecules, contacted Mouad Alami, who is now the director of the Biomolecules: Design, Isolation, Synthesis research unit (BioCIS – Univ. Paris-Saclay, CNRS and Univ. Cergy-Pontoise). He specialises in, among others, designing and discovering bioactive molecules, whether they come from syntheses or from extracting natural products. Mouad Alami is the only one who can modify molecules so that they have nontoxic physical, chemical and pharmacological properties that are compatible with in vivo studies.

In 2017, Sébastien Apcher, with the support of the SATT Paris Saclay, decided to identify all non-coding peptide sequences in sarcoma and melanoma cancer cells to develop a non-coding peptide vaccine. To do this, the researcher and his team sequenced tumour cells to identify all RNAs that could potentially be translated into peptides and to enrich an immunogenic peptides database. Alongside this, they eluted peptides that were located on the tumour’s cell surface. After this, they matched them in the database to identify and select immunogenic peptides that form the basis of the peptide vaccine. “For example, we sequenced RNA in the MCA205 sarcoma cells in mice, producing a database of around two billion peptides which potentially produce tumour cells,” explains Sébastien Apcher. In 2019, he filed a patent with Gustave Roussy for this peptide identification technology that can produce specific immune responses against some cancers.

Sébastien Apcher is now shifting his work to humans by testing on colon cancer biopsies. The aim of this is to inject future patients with specific non-coding peptides, to stimulate their immune system so that it will destroy cancer cells. The researcher is currently developing the same strategy for other cancers, such as breast cancer, and would like to find out if certain antigen peptides are common to several cancers, or if they are specific to each one. “We’re going to create a start-up soon to continue this work, and to turn the PTPs-VAC project into a vaccine, or in other words, get it certified,” summarises Sébastien Apcher.

This collaboration between the two researchers gave rise to another entrepreneurial venture in the field of therapeutic innovation. This is Elikya Therapeutics, which was created in December 2021. It is in Strasbourg, at the Semia business incubator. This start-up develops small molecules as part of new treatments against cancer, thanks to new generation treatment candidates. Their work is based on two types of technology. The first uses Sébastien Apcher’s work about identifying immunogenic peptides to stimulate the immune system. The second aims to develop small molecules with multi-target activity. In other words, molecules with the additional capacity to interact with one of the tumour development mechanisms, whether it is proliferative or epigenetic. “There is still no solution on the market that combines these two processes, and because of this, we think that this gives these small molecules unprecedented and very promising properties,” stresses Mouad Alami. Since they are highly cytotoxic, these small molecules are used in an antibody-drug-conjugate strategy.

An ambition full of hope

The two researchers now have a preclinical proof-of-concept in animals for several tumour models, such as sarcoma, melanoma and lung cancer. To shift this technology to humans, they need to now fine-tune their understanding of the mechanisms by which these small molecules work and are looking for investors to be able to do this.

Elikya Therapeutics’ goal is driven by its name, which means ‘hope’ in Lingala, the native language of Sébastien Apcher’s wife, who was born in the Democratic Republic of the Congo. This is because these two researchers are driven by the hope to save lives thanks to cancer immunotherapy treatments.