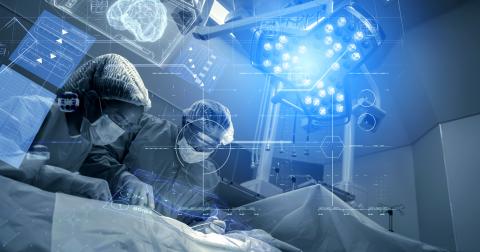 Created in March 2021, the start-up Beams is the result of research work carried out within the Irène-Joliot Curie Physics of Two Infinities Laboratory (IJCLab - Univ. Paris-Saclay, CNRS, Univ. Paris-Cité). This Medtech start-up is developing a probe, dedicated to improving solid tumour surgery.

The Beams start-up arose from a meeting between two researchers. In 2007, Stéphane Palfi, Professor of Neurosurgery, Head of the Neurosurgery Department at Henri Mondor Hospital and Head of the Biotherapies Group at the Mondor Institute of Biomedical Research (IMRB - Univ. Paris-Est Créteil), contacted Laurent Ménard, Lecturer at Université Paris-Cité and a member of IJCLab. He wanted to improve the quality of exeresis, or the removal of brain tumours in order to offer better treatments to his patients and improve their quality of life. Traditional approaches, based on medical imaging, are regularly insufficient to arrest real growth in tumours during surgery. The aim was to achieve a more precise definition of the resection margins of these tumours, in order to remove them without leaving residues or touching nearby healthy tissue. "This is a major issue in the field of solid tumour surgery, because the risks of functional deterioration or recurrence, sometimes in up to 50% of cases, are significant," comments Laurent Ménard.

Diagnosis and treatment: a two-in-one tool

The lecturer, who specialises in the development of nuclear imaging devices for various tumour pathologies, created an instrument to address this issue. Developed as part of the Tumour Resection Intra-Operative Probe (TRIOP) project, it is designed to facilitate the real-time (during surgery) localisation and aspiration of tumour residues once the tumour has been identified and removed. The surgeon goes in through the surgical wound with the probe, which emits a sound when it detects a high rate of tumour cells. This guidance is coupled with a visualisation of the tumour concentration on a screen.

To develop this tool, Laurent Ménard used techniques derived from nuclear medicine. This currently covers two major areas in oncology: tumour diagnosis, via the injection of a radioactive tracer called a radiopharmaceutical, which preferentially binds to tumour cells in order to determine the distribution of their concentration in the body; and tumour treatment, through the local irradiation of the cancer cells. The development proposed by the lecturer and his neurosurgeon colleague is part of a third pathway, where radiopharmaceuticals are used to guide the surgeon in real time in the search for tumour tissue during an excision operation.

Current technologies are not capable of accurately identifying tumour extension and resection margins. Indeed, the radiopharmaceuticals most commonly used in nuclear medicine emit positrons (the positively charged antiparticle of the electron), and when these charged particles propagate through the tissues, they disappear by emitting gamma radiation. To measure the distribution of these radiopharmaceuticals, the traditional imaging method, positron emission tomography (PET), pinpoints gamma radiation using a detector placed outside the body. However, it is not able to detect positrons directly. "Since our probe is in contact with the tissue which has been operated on, it can directly detect these particles. And since positrons only travel a short distance, in theory, our tool will make it possible to identify tumour cell concentrations much more sensitively and accurately," enthuses Laurent Ménard. To detect positrons accurately, the probe uses clear, sparkling optical fibres - which create light when exposed to radiation - coupled with a miniaturised photodetection system.

The creation of the Beams start-up

Armed with their unprecedented advances in oncological surgery, the two colleagues wanted to develop them. "Stéphane and I are not entrepreneurs, so we needed a driving force to get this innovation into the industrial world," says Laurent Menard. Encouraged by the CNRS, in 2020, he applied for its RISE programme which supports deeptech start-up projects. There he met entrepreneur and mentor Virginie Simon, who was enthusiastic about the project and joined the start-up's creation team as CEO. In mid-2020, he recruited an intern, Estelle Villedieu de Torcy, then a student at the École Centrale de Lyon and now the organisation's General Manager. Finally, in January 2022, Bruno Boyer, a physicist specialising in nuclear instrumentation, would join the team to manage the R&D element of the project. "The hardest part of creating a start-up is recruiting the right team and we succeeded!" says a delighted Laurent Menard. The start-up was created in May 2021.

From prototype to clinical test: an ambitious programme

Beams has produced a proof of concept, completed performance testing and an initial pre-clinical evaluation and is currently in the development phase for an industrial prototype. The team plans to launch a pre-clinical testing programme in 2024 and is targeting 2025 for clinical evaluations. "Based on requests from clinicians and the availability of radiopharmaceuticals, we have identified three pathologies: brain tumours, sarcomas and liver tumours," comments Laurent Ménard. To achieve this, the company plans to recruit a technical director in January 2023. In addition, the start-up, which has already received support from the BPI via the French Tech Emergence grant, is actively seeking funding. Finally, in addition to the two patents on the TRIOP probe already filed by the CNRS and used exclusively by the start-up, the team plans to draft new ones. In particular, to develop certain functionalities of the instrument or even create new ones.

"When Stéphane and I imagined the future of Beams, we didn't plan to create a start-up in order to sell it quickly, but to set up a permanent structure, working closely with our laboratories, in order to continue the venture over the long term," notes Laurent Ménard. Because the two scientists are working on many other projects, some of which could also be the subject of developments. For example, the THIDOS high-resolution gamma camera project, a portable imaging system that accurately estimates the therapeutic dose delivered to tissues and helps improve the effectiveness of internal radiation therapy. "We do not intend to industrialise everything we develop in the laboratory, of course, only the projects that have a relevant clinical application," concludes Laurent Ménard.