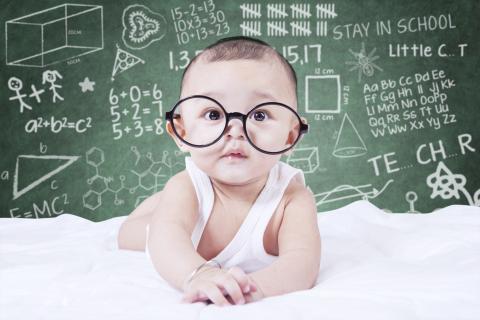 The mystery of learning in babies

Why do children have such a good capacity to learn? How is our perception of the world shaped? Where do human cognitive abilities come from? Ghislaine Dehaene-Lambertz’s team at the Cognitive Neuroimaging laboratory (UNICOG - Université Paris-Saclay, CEA, Inserm) are trying to find the answers to all these mysteries. Even though the brain still retains many secrets, advances in brain imaging are gradually lifting the veil on how it functions and its organisation. These non-invasive techniques can now be used on infants and offer a glimpse into the wonders of their development, their perception of the world and their awareness from an early age.

If the way in which adults learn remains an enigma, it is even more of a mystery in babies. From the moment they are born, newborns explore the world around them and assimilate a tremendous amount of information. Their brains develop at great speed. This is what fascinates Ghislaine Dehaene-Lambertz, who manages the Developmental neuroimaging team at the Cognitive Neuroimaging laboratory (UNICOG -  Université Paris Saclay, CEA, Inserm) at the NeuroSpin research centre. A paediatrician by training, she has often been faced with the issue of cognitive development. She has won an ERC Advanced Grant for her BabyLearn project. Thanks to advances in brain imaging, she wants to understand how learning is organised in young children in relation to the structure of the brain.

In the past, an explanation for human cognitive abilities has long been sought in the size of the human brain. While it is true that the size of the brain in hominids has greatly increased over the course of evolution, some archaic humans with smaller brains were already performing complex tasks. This argument about brain size fuelled many studies during 18th and 19th centuries in particular which were used to justify sexist, racist or discriminatory theories. We know today that there is no link between the relative size of the brain (or even the density of neurons in the cortex) and intelligence. Everything in fact takes place at the level of cerebral organisation. One of the characteristics of the human brain is the asymmetry between the left and right hemispheres. This anatomical asymmetry also supports a functional asymmetry, which for a long time was thought to be specific to adults and a consequence of the learning process. In reality, brain imaging has shown that these anatomical and functional characteristics are present in six month-old foetuses in the womb.

Scientists in the making

A baby starts learning earlier than you think. “Babies know that information is exchanged very early on using language, as well as non-verbal communication such as body posture and facial expressions. They use this information to categorise the world,” explains Ghislaine Dehaene-Lambertz. Babies differentiate between syllables and words. They do not yet associate meaning with this, but can distinguish between what is used to communicate and what is not. The misguided image of the child as a sponge, shaped by its environment and continuously and passively absorbing information, increasingly holds less sway. A baby actually takes a very scientific approach. “A baby is constantly making hypotheses about the world,” explains Ghislaine Dehaene-Lambertz. “If one of them turns out to be wrong, the baby adjusts the model so that it matches the information it has just received. The baby then projects any thoughts to the outside world.”

The most common method in the animal kingdom is statistical learning, which consists of deducing that two things are related if they are always seen together. “Someone who knows nothing about road regulations would understand by seeing all the cars stop at a red light that the red light means stop,” says Ghislaine Dehaene-Lambertz by way of an example. “A second level of understanding would be to notice the red in the other road signs and work out that this colour generally symbolises not being allowed to do something.” Symbolic codes permit abstract and compressed representations of information. Language is the prototype of symbolic codes. The word ‘cow’ encompasses a wealth of information beyond the mere image of the physical animal itself, and humans are thought to be the only living beings with brain circuits which can encode and compress information in this way. However, the origin of this ability remains unclear.

Working with babies involves various challenges which have to be overcome. Unlike an adult, a baby who is just a few months old cannot guide a researcher or explain its perception of an object or a sound. You also have to attract its attention. “You have to repeat the tests when using imaging so that you can extract the brain activity you’re interested in from the background activity, because the brain is always active. Babies lose interest very quickly. You have to make the most of the 10 minutes of cooperation they are happy to give to you,” explains Ghislaine Dehaene-Lambertz.

Scientists use MRI (magnetic resonance imaging) techniques to measure brain activity and its location in the brain, or EEG (electroencephalography), which uses a net of electrodes placed on the subject's head to temporarily break down this activity using millisecond resolution. Both of these techniques are non-invasive and the babies enjoy experiments which are much more fun than those used for adults. Scientists show them an image or a series of images and give a label, word or sound to each one. By analysing the baby’s reactions and brain activity, scientists can understand how infants process information. Ghislaine Dehaene-Lambertz’s team have shown that the association between an object and its label occurs naturally in babies, who can also reverse it, unlike macaques. They can associate the image with the label. In other words, from an early age human beings are capable of expanding the simple controlled association ‘A is followed by B’ out to ‘A is worth B’. This short cut between consequence and equivalence is often misleading - thunderstorms bring rain but rain does not mean thunderstorms - but is very effective in the learning process.

Overall, this type of experiment shows early symbolic learning, which is particularly useful when performing logical operations, such as combinations or negation. “In this way, we get rid of sensory representations which are too overwhelming or too onerous. A much more computational approach is reached,” explains the researcher. For example, five-month old babies who do not talk still understand negation (A and not A). Ghislaine Dehaene-Lambertz’s team are now looking to go further and study other logical operations. Analysing the world, combining information and looking for causality is a characteristic of human cognitive development.

Studying the learning process also has a broad societal significance which adds to the expansion of scientific knowledge. It is needed to inform medical practice in neonatology - something which Ghislaine Dehaene-Lambertz is very familiar with. Some babies are born prematurely and the consequences of this on their cognitive development are still poorly understood. In more general terms, learning difficulties at school, such as dyslexia or learner variability, remain a mystery. A better understanding of learning from a neurological point of view is essential to better support children with these disorders, as well as to adapt the teaching methods used in schools.